Update, 6/27: Just spoke to Jeff Farley, the mayor of Ferndale. He said he'd just finished running a meeting of the Humboldt County Association of Governments (HCAOG) at Eureka City Hall when he got a call on his cell phone from a Eureka resident who'd gotten his number off some papers that the alleged car thief was throwing out the window on his fateful drive.

The alleged thief is a transient with no belongings, Farley said. And he totaled the truck. As for My Badass Neighbor, Paul King, Farley remarked, "Hey, he is [badass]. Anymore you don't know if the guy's got a gun."

Farley's trying to get a hold of King to thank him personally.

So my wife and I are making dinner when, out the kitchen window, we see a cloud of smoke screaming down the street. It's a white Chevy Z71 pickup careening down Huntoon at breakneck speed on three blown-out tires. So I do what any self-respecting American citizen would do in that situation: I walk outside and gawk like a moron.

My Badass Neighbor, on the other hand, sprints out the door, hops into his own truck and proceeds to chase the fucker down. Like he's Jason Bourne or some shit. He finds the guy fishtailing and kicking up gravel in a nearby alley. Evidently it's not so easy to drive on three blown tires. My Badass Neighbor then hops out of his truck, yells at some of my fellow gawkers to call the cops and engages in a foot pursuit with the guy, eventually tackling his ass to the ground.

Cops arrive, arrest the dude and throw him into the back of a patrol car. My Badass Neighbor --whose name is Paul King, by the way -- tells the cops what happened, then comes and tells me that, according to the cops, the Chevy Z71 belongs to Fortuna Mayor Doug Strehl. [Update: It actually belonged to Ferndale Mayor Jeff Farley.] It had been parked at Eureka City Hall when the guy stole it, My Badass Neighbor says.

A handsome, crew-cut officer with the Eureka Police Dept. kindly declined to offer more details. We'll provide them when we can. In the meantime, here's the truck and the handsome officer: 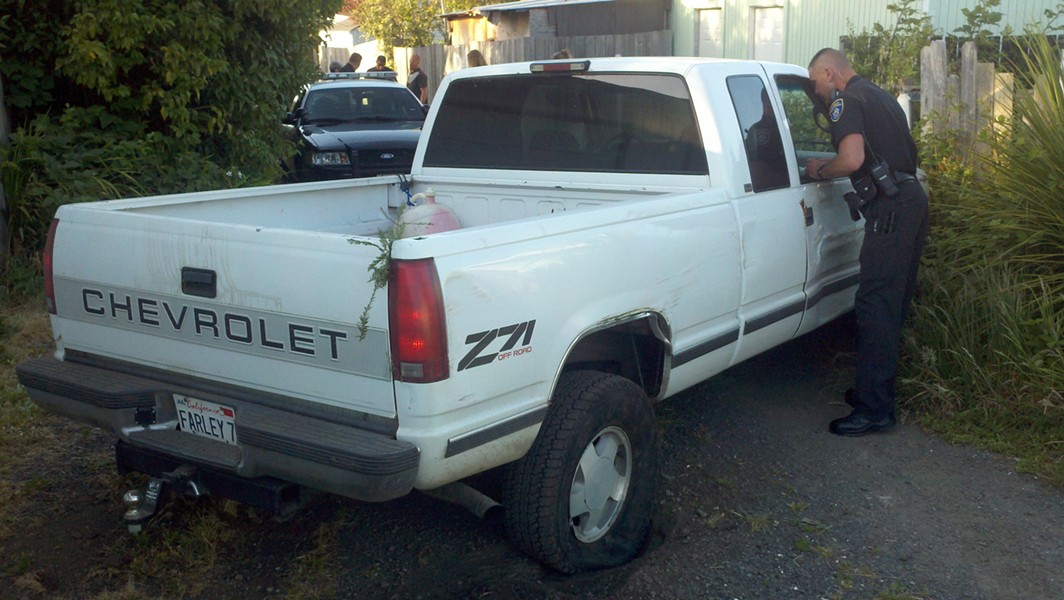 Here are some of my kind neighbors and a few of Eureka's finest:

And here, ladies and gentlemen, is My Badass Neighbor, Paul King, showing off some of the blood he shed for our freedom: