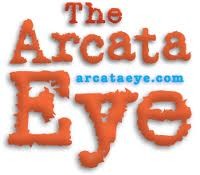 Hidden beneath the fold of last week's Arcata Eye, in a small front-page story about digitizing the newspaper's archives, owner/editor/publisher Kevin Hoover casually slipped in some startling news: The community weekly will cease publication on Feb. 14, 2014.

Reached by phone this morning, Hoover said he has both personal and professional reasons for his decision. Personally he'd like more time to pursue other creative outlets, a luxury that his current workload simply doesn't allow. "Doing this paper eats my life," he said.

And professionally he's not satisfied with the product he's been able to produce on a shoestring budget. "By and large people are pretty happy with what's in the newspaper. I'm not," he said. "It only has about five percent of the news I'd like to have in it. And really I'm just tired of doing things fast and shitty."

Hoover published the first edition of the Eye on October 22, 1996, shortly after the demise of the Arcata Union, for which Hoover was a reporter. In the nearly 15 years since the Eye has become a popular -- if sometimes controversial -- source for community news, debate and humor, including Hoover's droll musings on area crime (compiled in two books, The Police Log and The Police Log II: The Nimrod Imbroglios).

Hoover said Arcata -- and really every community -- needs its own source of independent news, and he hopes to find others in the community willing to take over that task before he publishes the final issue of the Eye (on his 60th birthday). "I don't really feel like I'm doing an adequate job being the Fourth Estate," he said. "I'm doing what I can, but this town really needs to make a long-term commitment to an independent news-gathering entity."

With that in mind, Hoover said he plans to visit each Arcata neighborhood this fall, asking residents what they want in a community newspaper and what each of them can contribute.

"I've pretty much defined, over these last years, what an Arcata newspaper is," Hoover said. "But I'm under no illusion that there aren't people who can do it better -- on all levels. They could run a business better, approach advertising better, manage people better, and they could probably write better stories in a lot of ways too."

He noted that the media landscape has gone through an epochal change in recent years with the proliferation of Facebook, smartphones and blogging. This multitude of "shiny objects" vying for the public's attention make community newspapers, if anything, more important, Hoover said, because newspapers provide an independent perspective.

"Every community needs one, and they're the better for it," he said.