Mike Thompson. On a River. 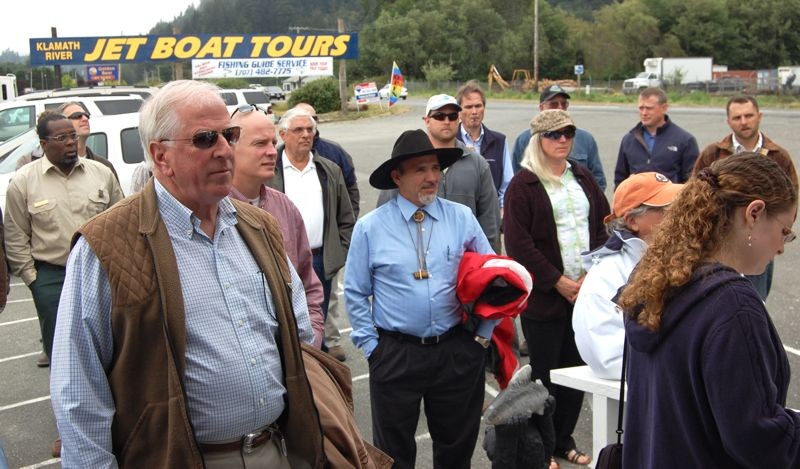 Congressman Mike Thompson stood in the front row, facing the docked shiny, blue jet boat, patiently waiting to get his river tour on. As the remaining 30-or-so passengers slowly shuffled aboard, Thompson -- sensing all eyes on him -- decided to take advantage of his clout and circumstance.

"I'm going to sing for all of you," he announced with a smile in a loud congressional voice. "Is there anything you'd like to hear?"

After a moment, someone shouted, "Springsteen!" (Okay, it was me.)

Thompson paused. "Isn't he the one that does, 'Born… on the Klamath River!'" he joked, half-singing the "title."

But his lighthearted, jovial mood matched the tone of the day. The Yurok Tribe had arranged the jet boat tour of the lower Klamath River -- attended by Yurok officials plus stakeholders from the Upper Basin, National Oceanic and Atmospheric Association (NOAA) Principal Deputy Undersecretary for Oceans and Atmosphere Monica Medina, media and Thompson -- to illustrate the area's importance to the tribe. Despite a contentious history on how the Klamath River's resources should be allocated between the stakeholders in the boat, on this mostly-sunshiny day everyone was chipper. You know, cuz we were on a boat. And boats are sweet.

Our journey took us from the jet boat station in Klamath quickly down to the river's mouth before we turned around and headed upriver. Along the way, the boat passed under the gawking tourist-heavy Hwy.  101 bridge where the mother gray whale is still taking up residence -- she's been there since late June.

"We hope there's some NOAA people around that can help enforce the Marine Mammal Protection act," the boat's captain joked over the loud speaker,  invoking light laughter. 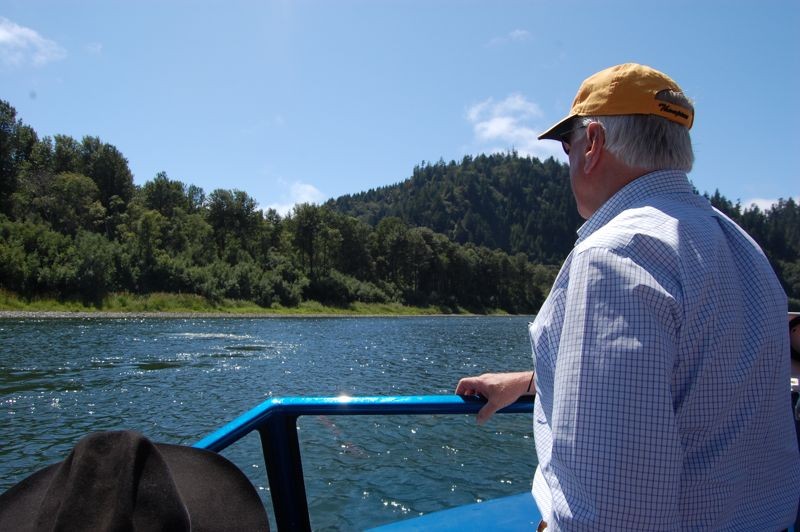 As the boat cut through the water, it was nearly impossible not to be slapped across the face by the overwhelming natural beauty.

Wildlife? Check! Osprey and bald eagles nested in the trees along the shore. Duck families swim-scurried through the water away from the noisy boat. Great blue herons soared low near the water's surface. Some very-out-of-place looking cattle stood on the river's rocky shore.

"Those are feral cows," commented Thompson staffer John Driscoll from the row behind me. Sounded reasonable, so I bought it. I commented to Thompson, in the row in front of me, that the cows were "feral."

"Who told you that?" Thompson asked with a smile. I told him. "John's full of shit," he informed me. It turns out he was. "Those are moo cows. Cross out 'feral' and put 'moo,'" he said before spelling it out for me. "M-O-O."

On a couple occasions, our jet boat captain told us to hold on while he spun agile 360s in the river to the delight of the distinguished guests. Remarkably -- and regrettably -- we barely got wet.

"Did you feel that little bump?" the captain asked over the loud speaker. We hadn't. "We just crossed over the Humboldt County line." Nice. How many times has he used that one?

We arrived at the point where the Blue Creek tributary flows into the Klamath, a spot so rich in raw, natural dazzle that it had to be used for the day's stump speeches. With the boats temporarily stationed in the shallows, Yurok Tribal Chairman Thomas O'Rourke stepped onto the nose and spoke to the environment-overwhelmed audience about the river's economic and cultural significance.

"This is the doorway to the high country," he said, "the Yurok's most spiritual place. This river is our lifeline."

During our brief Blue Creek stop, Thompson, Medina and Yurok Tribe Policy Analyst Troy Fletcher each took turns affirming the region's importance and beauty. "It's magical," Thompson said, sincerely championing we're-all-in-this-together sentiments. After the quick speeches, we pushed off the rocks and were on our way. 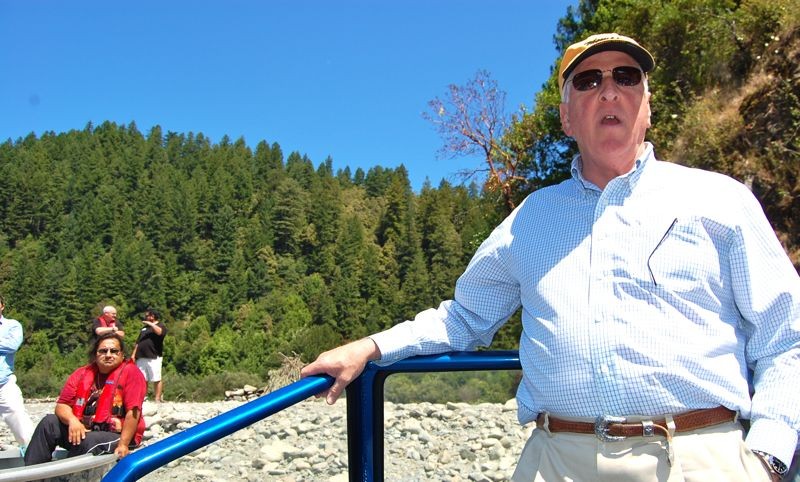 Cattle rancher and Upper Klamath Water User Association member Becky Hyde made the nearly 250-mile trip from Beatty, Ore., to show her commitment to maintaining healthy working relationships between the fishing communities downstream and the farmers in the Klamath Basin. At present, she feels that both sides have genuine concern for each other's communities, and she has been encouraged by the concern of both Thompson and Oregon Senator Jeff Merkley toward the two groups.

At the same time, last year was a hard one water-wise for agricultural interests in her region. "We're working with an old tool box," Hyde said. "To not deal with the issue is unconscionable."

Our boat docked back in Klamath and everyone disembarked, full from the visual meal they'd just consumed.

"I still want to drive your boat," Thompson said to the boat's captain.

Thompson is optimistic that the Klamath Basin River Agreement will be implemented, but he cited opposition -- namely, from dam removal opponent Congressman Tom McClintock. "I doubt he's even been up here," Thompson said.

On the separate issue of the imminent Monday release of the final California Citizens Redistricting Maps -- which could potentially lead to Mike being drawn out of California's First District -- Thompson wouldn't speculate.

"The maps have to come out," he said.

In the event that he's forced out of representing our district, Thompson said he'd be sad -- "Just thinking about it makes you tear up,"   he said. -- but that he'd still follow the issues that affect us.

"And as my wife pointed out, I can still come here to see friends and the places I love," he said. "I think it's something you call a 'vacation.'"

Yurok Tribal Chairperson O'Rourke and Congressman Thompson got to sit in front.

A bald eagle illustrates why telephoto lenses were invented. 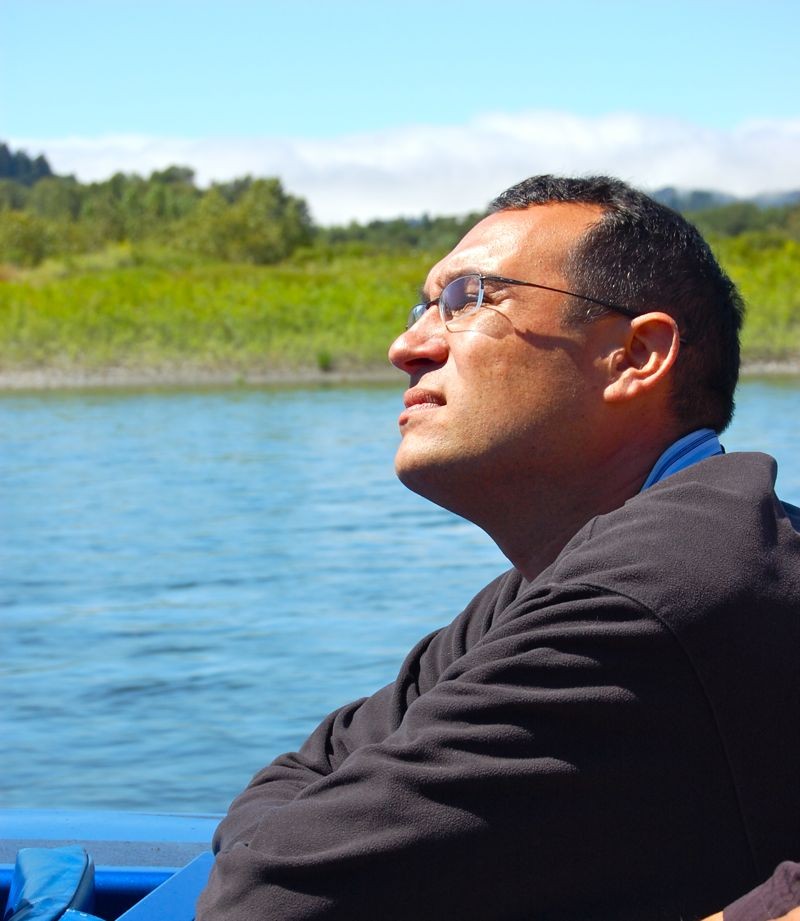