At its heart the press release sent out last week by the Kinetic Universe was a plea for help. "CALLING ALL ANGELS AND ECCENTRIC MILLIONAIRES: SAVE THE KINETIC MUSEUM!" it shouted in its all caps title.

The problem laid out by Kinetic Universe President Kati Texas seemed dire: "Despite every effort of fiscal and human power, Kinetic Universe is unable to maintain the Kinetic Museum at its current location on Ferndale's Main Street."

As it turned out the solution to the museum problem was not that complicated, all that was missing was a proper channel of communication.

The museum warehouse is full of Kinetic Sculpture Race memorabilia from 40 plus years of racing, and what the KU folks described as "personal belongings" of the late "Glorious Founder" of the Kinetic Race, Hobart Brown. The collection had become a burden with rent and insurance at about $6,500 a year. 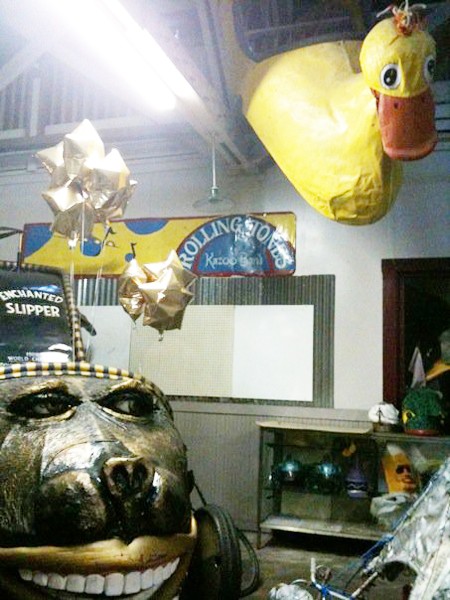 "We basically inherited the museum along with the kinetic race when the Humboldt Kinetic Association folded in 2007," Texas said in the release. "The building's owner, Sylvia Sterling, was keeping it open out of the goodness of her heart, as a great Kinetic supporter... It's always been a bit of a struggle for a tiny volunteer organization to preserve this history, and we are finally accepting that we are rapidly running out of resources to keep it open." They hoped that someone would help with funding, otherwise the museum's contents might be dispersed.

A subtext in the plea hinted at the ongoing rift between Kinetic Universe and Hobart's son, Justin Brown (see "Game of Kinetic Chicken" from May 2011). There was a suggestion that Hobart's heir should deal with his father's property. "Now that Justin has expressed his interest in preserving the Kinetic legacy and has resurrected the Humboldt Kinetic Association, we think he is probably the best person to take on this honor and responsibility," said KU Treasurer Emma Breacain, who indicated in later communication that they'd been unsuccessful in efforts to contact Justin.

Brown responded to a Facebook query from this reporter within a few minutes saying he was not aware that the Kinetic Universe was trying to reach him. He wondered if the press release could be forwarded to him. Before long he'd called the number Breacain included on the release. She reported later that he said he was "ready to pick up the keys and pay the rent."

"While it won't be quite as simple as that, it's nice to know there is a solution on the horizon, and I'm glad Justin is involved," added Breacain.

Brown called the Journal Sunday to reiterate, "We're definitely taking the museum over; the Humboldt Kinetic Association and I are taking care of it. We've already talked to the owner of the museum and contacted Emma."

Brown was not exactly happy about how the transition went down. "The press release was unfortunate -- that was the first I heard about the problem at all," he said. Furtermore, based on his reading of a 2009 IRS 990 form, he questioned the KU's assertion that they were losing money on the museum. "They had the income to do it, to pay the rent," he said referencing the document, which shows $6,414 as cost of running the museum and $10,166 as income. (Note: Breacain says when she indicated that KU "spent 50 percent more this year than we did last year" she was referring to the race and the museum together. She sees the museum as an expense of running the race "since it's the race's history." )

"A lot of people come in the museum and see the stuff. It's very important to Ferndale. It wasn't a total drain in that it actually earned $4,000 that year," said Brown. "Now we're having to use our creative energy with navigating this thing with the Kinetic Universe instead of focusing on the [Kinetic Sculpture] Race."

"I wish we were making money from the museum," said Breacain. "The only income it brings in is a few hundred dollars from the public - that's the only revenue coming in [from Ferndale]. We always had big ideas about things we could do with the museum. There are other ways you could go if you had the staffing. It will be interesting to see what they do if they take it over."

As to how Kinetic Universe claims they ended up running the Kinetic Museum, Brown disputes that too. "They say they inherited the museum as well as the race -- I don't know where that comes from," he said.

"They had a contract with my dad to run the race -- my dad wasn't telling them to do what they wanted with it for the rest of its existence. They don't have a contract any more. Nothing is signed for the next race." He sees the race as his inheritance.

"Justin alludes to a contract we had with Hobart," said Breacain. "Kinetic Universe never had a contract." She is adamant that Hobart never set up any formal agreement with KU regarding the race. "He was just happy that somebody was keeping it going, keeping the race alive."

She definitely does not think the Justin inherited the Kinetic Race. "The whole inheritance issue always seemed funny to me. We were running the race before Hobart's death," she said.

"They're saying they're going to run the race regardless," said Brown. "We're looking at an injunction, but that sucks because we don't really have a lot of funds right now. I'm just not as prepared to do battle as my dad was. He was ready to take whoever on, whenever needed."

While the Kinetic Race is not until next May, Kinetic Universe had set a deadline for resolving the museum problem for the end of September. Brown says he'll take it over once the KU board meets and approves the plans he's made with Breacain, who still says she's "glad Justin is involved."

"The museum is the first step we'll take as the HKA," said Brown. "The landlady is very interested in keeping it in Ferndale and we want to see it stay there. The race was a Ferndale event back in the day and [the museum is] an important landmark." He concluded by hinting that changes may be in store. "I have a vision of redefining the museum, returning to my father's vision of it."

For her part, Breacain seemed supportive saying, "I hope this pans out and I hope he can take the museum to that 'next level' that we haven't been able to."

What remains to be seen is the long-term effect on the future of Kinetics. This museum problem may resolve itself amicably, but there are still two organizations vying for control of the Kinetic Sculpture Race -- and all its glory.