"This Is the Future"

It's finally complete. After years of operating a state-of-the-art alternative energy lab in a collection of dilapidated buildings in the back of Humboldt State's now-empty University Annex, the Schatz Energy Research Center moved into its new digs on Friday, celebrating with the grand opening with the requisite speeches and an open house.

The brand new 6,000 square foot SERC includes three laboratories, one of them in an outdoor courtyard, and a machine shop along with office space and other amenities for staff and students. Best known for its research on the application of hydrogen fuel, the lab is designed to continue that work along with other explorations of the potential for new energy thinking with local and global applications.

HSU President Rollin Richmond, Rep. Mike Thompson and Schatz Director Peter Lehman were among those welcoming the crowd Friday morning. Richmond offered praise for the lab's forward thinking work on energy and for those who made it possible; Thompson began with lamentation about redrawn district lines that mean he will no longer represent the North Coast post-election, then moved on to describe the work at the lab as "a metaphor for what we need to do in this country to get things going, to create jobs, to become more sustainable." He concluded, "Right here you have it all: You have education, you have innovation, and you have renewable energy... This is the future."

As an Earth flag fluttered in the wind, Peter Lehman thanked pretty much everyone involved in the project, then spoke of the late Dr. Louis W. Schatz, head of a plastics company, whose multi-million dollar bequeath made SERC possible. Lehman quoted Schatz whose hope was that the lab's research might "eventually solve many of the world's energy and pollution problems."

After cutting a bright blue ribbon that floated up with the aid of helium balloons, Lehman led the crowd into a conference room then narrated as a time-lapse video showed the construction of the green-built structure, which meets LEED (Leadership in Energy and Environmental Design) Gold equivalent standards with its high-tech insulation, radiant heat floors and other energy-saving features.

While the Schatz Center is best known for its work on hydrogen fuel cell technology and as home of the nation's first solar-powered hydrogen fueling station, the open house demonstrated the range of other work going on, some of it with global reach.

A group of HSU students from the lab showed off their summer project, GridShare, which involved traveling to Rukubji, a small village in Bhutan where they worked with residents to solve an ongoing energy use problem.

The local electric system there uses a micro-hydro generator in a river to create power, but the over-taxed arrangement was suffering regular brown-outs, particularly when too many residents simultaneously prepared meals using energy-sucking rice cookers. The students designed and installed a rudimentary Smart Grid system that monitors electricity usage and shows when the system is approaching capacity. A simple green light/red light basically tells users when it's OK to start their cooker. (It can disable the power if it's not the right time and advice is ignored.) The $75,000 funding for the project came from the U.S. Environmental Protection Agency's People, Planet and Prosperity Award, focused on climate change and sustainable development.

In a downstairs lab, Kristen Radecsky showed another global outreach project SERC is involved in: Lighting Africa. The problem is this case is that much of the world, particularly Africa, the so-called "dark continent," does not have home electric power at all. Old school lighting techniques such as kerosene lamps have multiple downsides: They require ongoing fuel use and expense, they emit fumes that can cause respiratory problems, and they're dangerous, causing numerous home fires. Radecsky demonstrated one solution: an off-grid solar-powered LED lighting system that can also recharge a cell phone. The lab's role here is testing the systems with results given both to potential consumers and to manufacturers who want to improve their products.

In the courtyard lab another student explained the uses of something called a torrefier, a prototype of a fuel processor acquired from the San Mateo start-up, Renewable Fuel Technologies. In the torrefaction process, biomass, such as wood waste from logging, is super-heated without oxygen, dried and compressed to create a renewable energy-dense product known as "BioCoal." Local applications seem obvious -- three truckloads of wood chips can be reduced to fit in one truck -- but torrefaction can also be applied to other plant materials including fast-growing grasses. SERC's research involves figuring out a way to make the mobile torrefier operate using the electricity and heat generated in torrefaction so it will be self-sufficient.

Of course SERC has not forgotten hydrogen-fuel. Senior Research Engineer Richard Engel manned a station demonstrating the principles of deriving energy from breaking water molecules into oxygen and hydrogen.

He also explained that the Toyota Prius fuel cell-powered car the university was testing when they built their solar hydrogen fuel station is now in mothballs. The emission certificate issued by the Calif. DMV ran out two years ago and even though the vehicle's emissions are almost nonexistent, certainly far below fossil fuel cars, no one in Sacramento seems to be willing to sign off on a needed exemption. Instead the SERC folks are test-driving Toyota's latest hydrogen-car, known by the acronym FCHV-adv (fuel cell hybrid vehicle, advanced). It's essentially a Highlander SUV souped-up with four compressed hydrogen fuel tanks, a nickel-metal hydride battery, an electric motor and power control unit. Since they were offering demonstrations, this reporter was driven home. The ride was smooth -- presumably ecologically sound -- and quiet as a whisper. Maybe that's the sound of a green future. 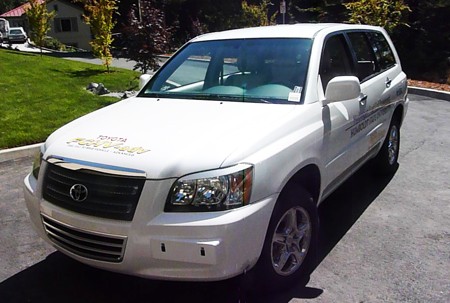