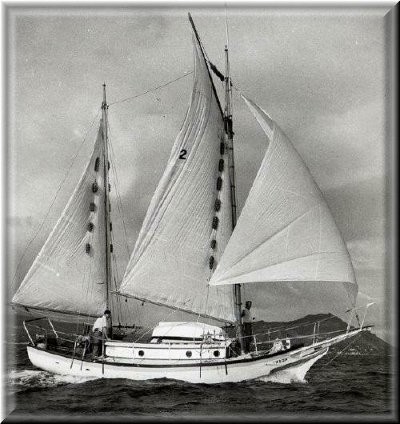 Remember the little peace ketch we told you about, the Golden Rule? She's the 30-foot double-masted tall-ship beauty whom Quaker activists twice tried to sail to the Marshall Islands in the late 1950s to interrupt U.S. atmospheric nuclear weapons testing.

She fell into a variety of hands after that, including, more recently, into those of Eureka doctor Laurence Badgley, before ending up sad, neglected, battered and beached in front of Leroy Zerlang's boat repair yard on the Samoa Peninsula. Zerlang and his son, Cody, had twice rescued her from a wayward, sinking, end-of-career demise in Humboldt Bay, and the Garberville and Humboldt Veterans for Peace chapters finally took charge of her resurrection.

Well, that's coming along nicely, despite the ever-pressing need for more cash and supplies, says restoration coordinator Chuck DeWitt. For the past year, in space donated by Zerlang, a part-time, small volunteer crew of experienced shipwrights has been slowly rebuilding the Golden Rule.

"We've got the planking underway," said DeWitt. "We started at the bow and worked our way toward the back. In order to finish the planking on the side, we had to re-do the transom -- that's the stern of the boat."

The transom is a lovely thing, made of purple heart, a redder-than-mahogany, extremely hard wood from South America. "You hit a log at night, going through the bay, and it won't poke a hole in the hull," DeWitt said.

Crews have also cleaned out her inside, inspected the keel -- in good shape -- and replaced broken ribs. They're at a standstill on finishing the planking, though. "Our boatwright, David Peterson, who's doing most of the planking, he's got his hands full right now repairing wooden salmon boats and crab boats so people who need to make a living can go out fishing."

In the meantime, they're asking for plywood donations to build a carport over her in time for winter; right now she's sheltered under a flimsy tarp canopy. They figure they need 30 sheets of 4x8 plywood for the project.

They're amassing more supplies for the Golden Rule, as well.

"I just brought down 1,200 board feet of Port Orford Cedar from up by Tistol River in Oregon -- that's above Brookings 15-20 miles," said DeWitt. "When it's tight grained, good quality, it's a very very good wood for boats. We will use it for planking, for deck supports, for flooring and probably several other things."

Half of the cedar was donated, he said, and he got the other half at a drastically reduced price.

They've got a possible lead on some parts from a sail boat -- anchor, hardware, maybe a mast and water and fuel tanks. And they still need an engine.

Most of all, though, they need more savvy ship builders.

"It's not like building a house," DeWitt said. "Anybody can pound a nail. On a boat, it's totally different. It's practically impossible to find experienced people. We've got two or three right now, but they're only part time because they have jobs. We have a girl, actually, who has experience, but she spends a lot of time out at sea on various sailboats."

Wanna help? Contact Peter Aronson with the Humboldt Bay Chapter of Veterans For Peace: aronson@humboldt1.com or 707-442-3009.

You can check out the Veterans for Peace Golden Rule Project here: http://www.heritech.com/goldenrule/goldenrule.htm