See, Derick and Ashley got busted. (Read the release after the break.) 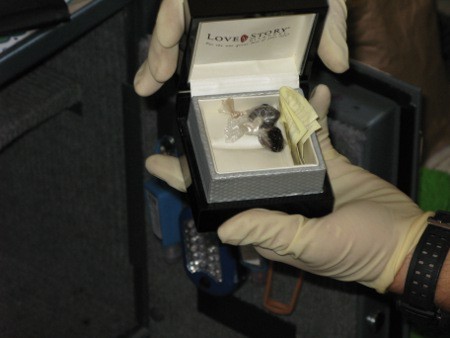 On 9/21/11, at about 2:22 PM, investigators with the Eureka Police Department's Problem Oriented Policing Unit executed a search warrant at a residence on the 2600 block of Union Street, Eureka. The warrant was obtained after the POP Unit developed information residents there were selling heroin from the property.

During a search of the residence, investigators located and seized approximately ½ ounce of tar heroin, over $4,700.00 cash (suspected illicit drug sales proceeds), digital gram scales, drug sales packaging materials, and a stolen .40 caliber Springfield Armory XD semi-automatic handgun with ammunition. The handgun had been reported stolen during a recent residential burglary in Eureka.

Anyone with information concerning suspected drug sales activity occurring in Eureka is encouraged to call the Problem Oriented Policing Unit at (707) 441-4373 or the Humboldt County Drug Task Force at (707) 444-8095.