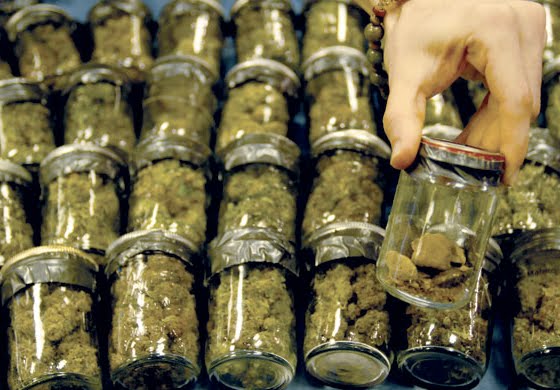 According to the Associated Press, federal prosecutors have begun to crack down on dispensaries in California, sending letters to at least 16 of them (and/or to the landlords) ordering them to shut down within 45 days "or face criminal charges and confiscation of their property even if they are operating legally under the state's 15-year-old medical marijuana law  [emphasis added]."

Correct me if I'm wrong, but isn't that precisely the opposite of the position previously indicated by the Obama administration? Maybe this apparent change of heart will be explained coherently tomorrow when the state's four U.S. Attorneys announce a "broader coordinated crackdown."

[Update, Oct. 5, 2:15 p.m.] Cue unlikely about-face: Last night the Eureka City Council voted by the narrowest of margins (3-2, with Lance Madsen absent and Mayor Frank Jager casting the tie-breaking vote) to ask the planning commission to tinker with the City's marijuana ordinance, rather than enacting a moratorium. Meantime, down in Oakland, the feds busted a huge dispensary the same way they busted Al Capone -- via the tax man.

They say pot makes you paranoid, which certainly seems to be the case for the cities of Eureka and Arcata. Tonight, barring an unlikely about-face, the Eureka City Council will put the brakes on permitting dispensaries and cultivation facilities. Tomorrow night, Arcata will reexamine its own medical marijuana ordinance, which has served as a model for cities statewide.

They also say: Just because you're paranoid, it doesn't mean they're not after you. And indeed the federal government has indicated that it may come after California cities that dare accommodate the will of state voters, who 15 years ago passed the Compassionate Use Act.

As the Times-Standard  reported earlier this week, Eureka officials went and asked the U.S. Attorney's Office about the legality of its medical marijuana ordinance and -- rather predictably -- got a barrage of threats in response. U.S. Northern District Attorney Melinda Haag rattled her rhetorical sword mightily, writing in a response letter that if the city dared allow "large-scale industrial marijuana cultivation, processing and distribution" then her office would at least think about bringing the hammer down: criminal prosecution, fines, property seizure ... probably even a disappointed head shake.

The city looks poised to acquiesce in the face of these threats, which really frustrates Kellie Dodds, the executive director of Humboldt Bay Wellness. In a phone interview today Dodds said that her nonprofit dispensary had secured a location in the city (on the 200 block of Fourth Street) for a 6,600-square-foot dispensary and was just minutes or hours away from completing its Conditional Use Permit application.

"We've done everything that has been asked of us and then some in the spirit of good faith, [expecting] that we would be able to move forward with the City," Dodds said. If the city council elects to institute a 45-day moratorium, Dodds said she and her fellow investors stand to lose a lot of money and momentum. "I don't know where that leaves me," she said.

Arcata will consider whether or not to process pending conditional use permits or institute a moratorium of its own.

For the time being, California cities remain stuck between constituents who emphatically support safe access to medical marijuana and a federal government that insists the plant is not medicine but a Schedule One narcotic. Arcata Mayor Susan Ornelas may have summed it up best when she told the T-S, "It's a real frustrating dilemma."