"Who Pooped And Peed on the Bank? (Ode to Betsy Lambert)"

Seven-O-Heaven's "Will" was inspired by recent events at the Occupy Eureka encampment and sent us this ode to Betsy Lambert. It's kinda childish, but "Will" usually is. 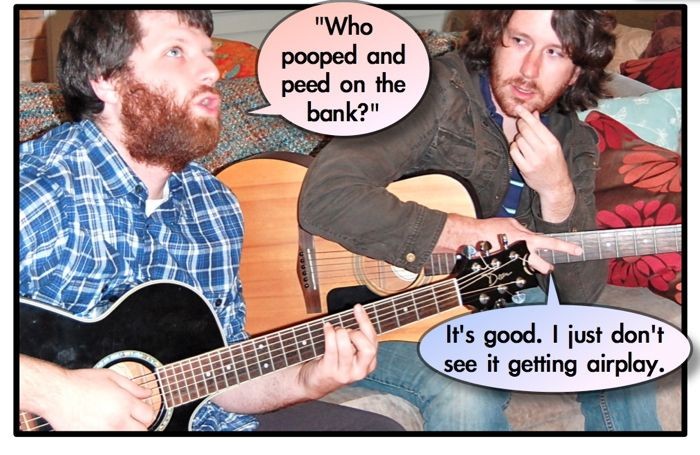 UPDATE!!!: Will just sent along the lyrics and chords so that you can all play and sing along (as if you'd want to).

The other news media were all out to lunch
But our own Betsy Lambert acted on a hunch
That the poop in the doorway had been left by the bunch
Of the Occupy camp as a prank
So she shook up their tents and she rattled their camp asking
"Who pooped and peed on the bank?"

The protesters resisted, not sure what to think
But Betsy, determined to find the source of the stink,
Was sure the occupiers would be the first to blink
Somebody had to be blamed!
Since, after all, these were essentially kids, she cried
"Who pooped and peed on the bank?"

The poop's been bagged up, the pee, it has dried
But the perp's still at large, we should all run and hide
They might poop on us next, but at least Betsy tried
We all owe her great big ol' "Thanks."
But the question's unanswered, we're still wonderin'
"Hey, who pooped and peed on the bank?"

Just for context, the video that started it all:

In the Spirit of the Northcoast.

UPDATE: KIEM has claimed copyright on "poop and pee." So here's another one:


UPDATE: Another day, another scrub. Here's more poop and pee:

And finally, a transcript: