UPDATE: Orleanser Rhonda Olson (aka Grandma Rhonda) emailed us to say the new mushroom picking permit policy is "insane at best," and she suggests it might even backfire:

"It encourages people to have to pick more mushrooms than they need for a meal just to pay for the permit."

And if you don't want to spring for the seasonal permit, she says, it's hard to know what five-day stretch you should get the shorter-term permit for -- that is, those mushrooms can come up whenever and wherever they want. Defiantly she notes:

"I hope that the Forest Service is building some place to put all of us locals who will not accept our tickets like good little sheep." 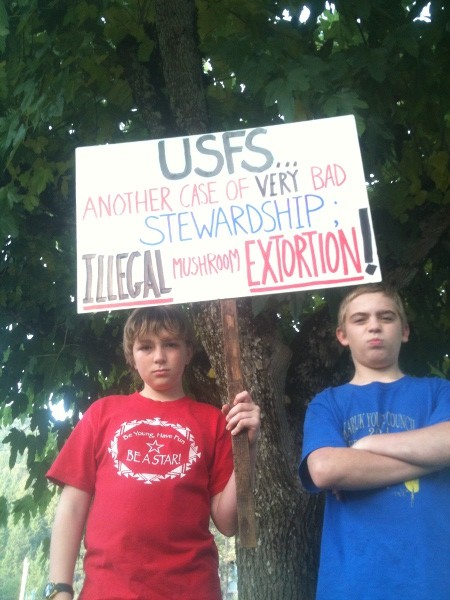 About 30 or so people gathered outside of the Six Rivers National Forest Service's ranger district office in Orleans yesterday to protest the new fees imposed this year on recreational matsutake collecting.

Unlike commercial permits for matsutake collecting, recreational permits used to be free -- and there were no age restrictions. Now, a recreational mushroom gatherer must pay the same as a commercial gatherer: $35 for a minimum five-consecutive-day permit, and $7 per day for each day thereafter. A 30-consecutive-day permit is $100 and a full-season permit is $200. (The matsutake season opened on Oct. 10 and closes Dec. 31.)

Mind, that's all just for one person -- if the whole family wants to go a-mushroomin' and have every pair of hands in the game, each person has to get a permit. And kids under the age of 18 are not allowed to collect under a fee-permit.

Mad mushroomers announced their protest ahead of time: 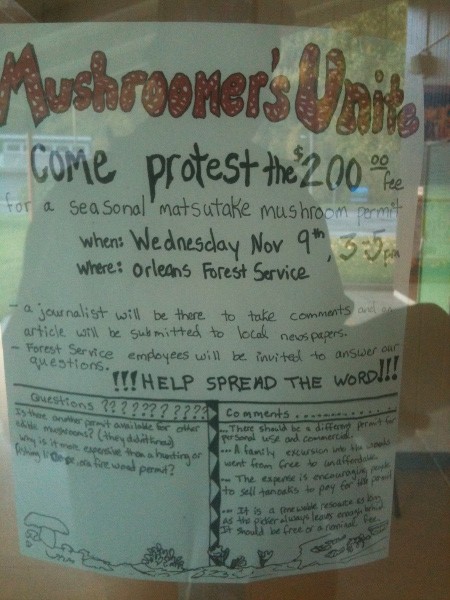 According to onlookers, it was a peacable affair. The protesters invited Six Rivers' Orleans District Ranger Nolan Colegrove to the party, and he and public affairs officer Julie Ranieri, who drove up from Eureka, and SRNF botanist Lisa Hoover talked with them awhile, answered questions and took note of their complaints.

Later, Ranieri said SRNF Supervisor Tyrone Kelley is concerned about the effect of the fees on families:

"That's actually one of the issues raised that really got Tyrone's attention -- the fact it's changed the way families and kids can go out and harvest mushrooms," she said.

The permit fees go back into the Forest they're collected from, Ranieri said, and are used to finance its botanical products program. But while the law mentions "sustainability," Ranieri said the matsutakes on the Six Rivers "are not in danger" from overharvesting.

"It's not a question of trying to limit the number of people going out," she said. "It's just that things have changed and we're trying to manage the special forest products program to be consistent with Forest direction and policy."

Ranieri said she and Colegrove told the protesters that Supervisor Kelley would consider their comments when he's setting future management policy for matsutake collecting. But she didn't know if or when the program would be changed.

Meanwhile, Ranieri said, Six Rivers staff will bring the issue up at a regional Forest Service meeting next week.

(To catch up, we wrote a bit about the controversy last month.)