As media outlets and the public reflect on last week's disturbing U.C. Davis pepper spray incident, many are comparing it to a dark chapter in Humboldt County's own history -- the 1997 protest inside Rep. Frank Riggs' Eureka office, where officers with the EPD and Humboldt County Sheriff's Office used Q-tips to apply pepper spray directly to the eyeballs of environmental activists.

In today's San Francisco Chronicle, Staff Writer Bob Egelko cites the federal ruling in that case, which says pepper spray should only be used in situations where it would prevent harm to officers or someone else. He also quotes Margaret Crosby, an American Civil Liberties Union lawyer involved in the Humboldt case. She says pepper spray is unconstitutional when it's "used as a chemical cattle prod on nonviolent protesters."

Donna Tam of the Times-Standard spoke with Jan Lundberg, the father of one of the 1997 eye-swabbing victims. Lundberg said the Davis incident reminded him of his daughter's ordeal, and he speculates that the U.C. Davis officer who did the spraying must not have been aware of the rules regarding pepper spray.

And Chris Corsey penned an editorial in Sunday's Press-Democrat reflecting on the Eureka incident and calling the use of spray on nonviolent protesters at U.C. Davis "a colossally bad decision."

If you're more of a mind to laugh at the suddenly (in)famous "Pepper Spraying Cop," check out this Tumblr page, which features the lawman Photoshopped into famous photos and works of art. Here's a one for Thanksgiving: 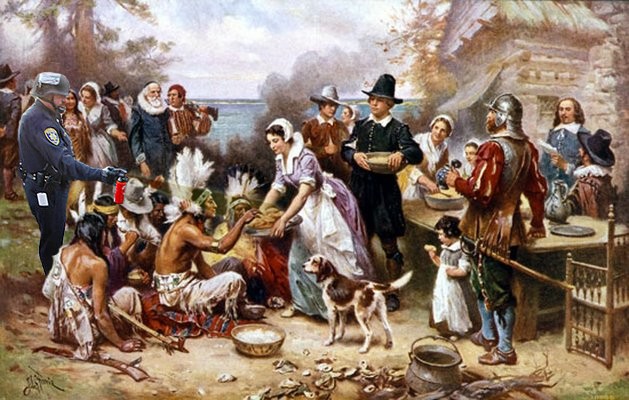