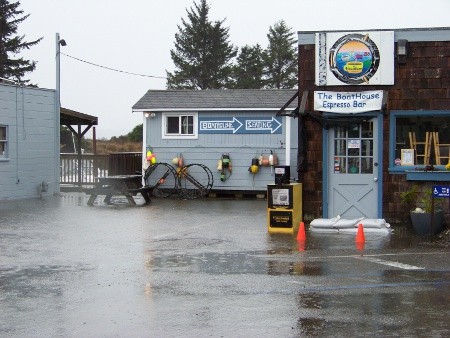 We're jumping the rain gun here, offering up some preliminary stats about this lasher of a storm.

But first a note about the photo: Yes, it's King Salmon and no, nobody's surprised about a little/lot of flooding in that low-lying, 'tween-the-track-and-the-bay fisherman's burg. Especially, says Jason Anderson at the Woodley Island office of the National Weather Service, when you've got high tides combined with a heavy storm with south winds whipping it all up. Although, it is sad to behold the sandbagged little espresso bar, with its chairs-up tables and no life inside at mid-morning on a day it's supposed to be open from 6 a.m. to 3 p.m. Maybe it's the flood, maybe it's something else -- we couldn't reach the owners by phone to find out.

Anyway, Anderson offers these stats from weather stations on the rainfall so far, since the long-longed for storm began on Tuesday (he'll have complete totals tomorrow morning when a break comes):

It'll rain lightly tonight here in Eureka -- more down in Mendo -- then there will be a break. "Then we're right back at it" with another storm, says Anderson. It won't be as big is this one, and there might be a wee break on Saturday. Then another whomper's coming in on Sunday.

The storm is warm and mostly rain has fallen in the region, Anderson said -- except in the cold, deep valley along the Highway 3 corridor between Weaverville and Trinity Center, where one to two feet of snow has fallen. The cold air was trapped in there, and the warm air just whooshed on over.