Pouring rain did not stop dozens of citizens from gathering at 5th and H streets in Eureka Friday at noon to join a nationwide protest marking the second anniversary of the Supreme Court decision Citizens United v. Federal Election Commission that defined corporations as "persons," and, as local organizers sarcastically put it, thus "entitled by the U.S. Constitution to buy elections and run the government."

Kaitlin Sopoci-Belknap of Democracy Unlimited (below) helped assemble the local gathering; she's also part of a new group, Move To Amend, a coalition working toward a constitutional amendment to redefine corporations, and, "rule that corporations are not people, do not have constitutional rights and money is not speech." 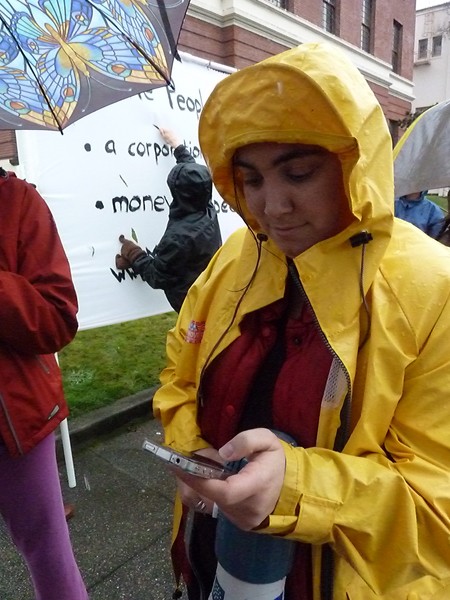 The group's first step is to have counties and cities around the country put the issue on the ballot for the November election. A Humboldt County version of the petition was passed around at the protest; former Arcata City Councilman Dave Meserve is pursuing a similar ballot initiative for Arcata. See www.corps-aint-peeps.org for details on the Arcata group.

Go to www.movetoamend.org/occupythecourts for further information about the nationwide movement.

Below, a uniformed protestor

Eric Schimps (below) from the Independent Observers Program was observing the protest in anticipation of possible police intervention. The police did not get involved. More photos here.