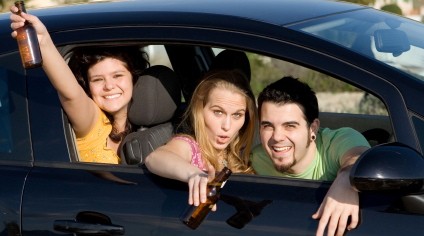 First, it's just, like, a bad thing to do. But also because sometimes those minors are decoys deployed by local law enforcement. The EPD sent out the following press release:

(Eureka) – The Eureka Police Department, in conjunction with the Department of Alcoholic Beverage Control, cited two clerks/employees for selling alcohol to a minor, and cited one other adult who purchased alcohol for a minor on 2-10-2012. This action was the result of a “minor decoy” and “shoulder tap” operation conducted with grant funding.

The Minor Decoy Operation involves minors who work under the direct supervision of law enforcement and attempt to purchase alcohol from 29 retail licensees in the City of Eureka, and greater Eureka area.

Those who sold to the minor face a maximum of a $250.00 fine, and/or 24 to 32 hours of community service for a first violation. In addition, the Department of Alcoholic Beverage Control (ABC) may take administrative action against the business’s liquor license. That may include a fine, a suspension of the liquor license, or the permanent revocation of the license.

The minor decoy WAS ABLE to purchase alcohol from the following businesses:

The minor decoy WAS UNABLE to purchase alcohol from the following businesses:

This project is part of the Department of Alcoholic Beverage Control’s Minor Decoy / Shoulder Tap Grant Project, funded by the California Office of Traffic Safety through the National Highway Traffic Safety Administration.

The Eureka Police Department would like to commend and thank the 27 licensees whose employees properly checked identification and did not sell to the decoy.