A couple of weeks ago, after we reported on an apartment fire at the corner of Church and Pine streets in Eureka, some readers commented that the fire was no surprise. The building, they claimed, was a blight, filled with drug-using, music-blaring, trash-dumping delinquents, all overseen by an absentee landlord who didn't much care. 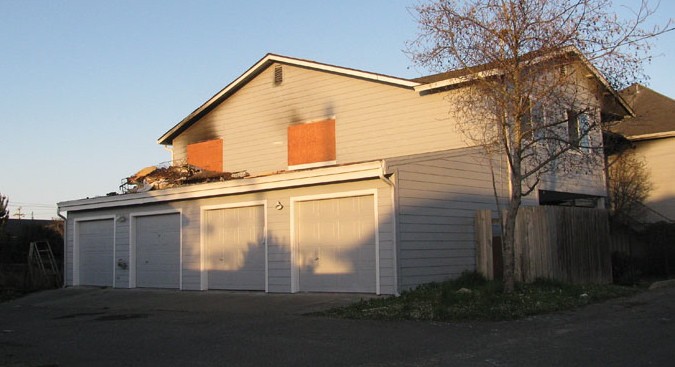 The landlord denies it. Police say they haven't gotten an unusual number of complaints about the building. But the rumblings of discontent illustrate some of the tensions in a struggling neighborhood.

Robin Trabue, who has lived across the street from 1628 Pine St. since 1987, said the house has been a problem for years. The four-unit apartment's tenants hang out on the porch and pick fights with passersby, leave trash all over, play loud music, and have late-night screaming matches that spill out onto the street, Trabue said.

Trabue's father, Dennis, owns the pumpkin-colored house diagonally across the street from the burned apartment. "There's always been a lot of drug activity there at the house," Dennis said. He and others made repeated efforts to contact Todd Petty, the landlord, with their complaints, he said. "He has not been responsive," Dennis said, adding that Petty must have been aware of the issues with his tenants. As for the fire, he said, "It was totally expected, for a long time."

Petty denied avoiding dealing with the complaints -- the calls weren't frequent, he said, and on the rare occasions that there were problems, he dealt with them. Once, four or five years ago, he had a problem tenant whom he eventually had to evict. "It took the better part of four months to get an official eviction," Petty said. "During that time it was very bad for the community, and the street, and the apartment holders." Since then, he said, he hasn't had any major issues with tenants.

The day before the fire, Petty got a call from a neighbor who heard what sounded like a fight in Apartment Three. Petty drove over. The mother of one of the tenants was sitting on the steps, smoking a cigarette. Everything was under control, Mom said; it wouldn't happen again. The next night - allegedly while manufacturing hash oil - police say that the son and his girlfriend caused an explosion, badly injuring themselves and starting the blaze that would eventually gut the complex.

Petty said, however, that the fire didn't change how he would go about picking renters. "I would pick her again," he said. "Good job, good references. This was such a surprise to me."

The tenants of Apartment Three are by no means unique in the neighborhood, say residents. Robin Trabue and his wife Michele Enenstein, standing on the porch of their new house, one street over from Trabue's father's place on Pine, pointed to several homes where they say they've seen people dealing drugs. "I like the house," Enenstein said, "But not the neighborhood."

It's a sunny day, but the shades are drawn at Mariah Martinez's house. She lives down the street from 1628 Pine. She and her husband lived in Arcata for years before moving to Eureka last fall. Within a month someone had spray painted the fence, egged their car, and later broke into the car. A neighbor was growing weed, she said, and homeless people frequent the lot across the street. She doesn't let her dog out in the yard, even though it's fenced, because she's worried about people messing with it. Martinez says that they're already looking to move. "We don't want anything to do with Eureka," she said.

Eureka police Sgt. Steve Watson said that prior to the fire, 1628 Pine was not on the police's radar as a major problem house. He said that there have been only eight 911 calls from the building and nearby properties in the last year -- not a particularly high number.

If Eureka residents do have an ongoing problem in their neighborhood -- whether a suspected grow house or meth lab, unkempt yard or abandoned vehicles -- the best way the best way to deal with it, Watson said, is to file a complaint with the Eureka police's Problem Oriented Policing (POP) Unit. Residents can either call POP's direct line at 707-441-4373, or pick up a complaint form at the 604 C Street station. Complaints can be made anonymously, although Watson said that complaints are most effective when tied with contact information.