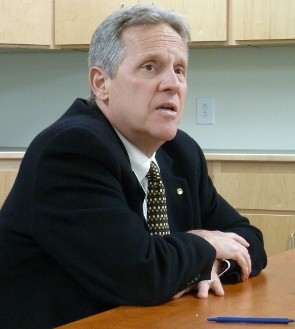 In a press release, St. Joseph and Redwood Memorial hospitals said Mark and his wife want to spend more time with their young granddaughter in Ohio. Mark did not return a call seeking comment.

Mark's departure comes just days after the two hospitals announced 68 layoffs, and later clarified that nearly one-third of those ousted are nurses or other clinical personnel. Mark blamed those cuts partly on reduced demand for elective surgeries and outpatient care.

Meanwhile, in a move that could further eat into both hospitals' business, the system is considering a ban on sterilizations, including cutting or blocking a woman's fallopian tubes after C-section deliveries.

Eureka, Calif. - April 4, 2012 - After six years on the job in Humboldt County, St. Joseph and Redwood Memorial Hospitals CEO Joe Mark announced today that he will leave the organization on June 30 in order to relocate to the Midwest to spend more time with family.

"Throughout his tenure, Joe and his team have achieved many notable accomplishments," said Kevin Klockenga, Regional Executive Vice President for Northern California of St. Joseph Health System. "Among those was the successful effort to raise $12.6 million locally for St. Joseph Hospital's new patient care facility that will open this summer. Additionally, Joe helped us recruit 30 new physicians to Humboldt County during the past two years."

Mark said he will miss his many colleagues and friends from the region.

"I am proud to have partnered with so many fine people these past six years including trustees, physicians, volunteers, employees and community leaders who have all contributed to building a successful future for St. Joseph and Redwood Memorial Hospitals," said Mark. "My work here is coming to a close and I am leaving our two hospital ministries in very capable hands."

"My wife Peggy and I are very excited about being active grandparents to our 18-month-old granddaughter Cate and to reuniting with our families in Ohio," said Mark. "We have made wonderful friends here in Humboldt County and it will be difficult saying goodbye to them and the beauty of the North Coast."

Mark came to St. Joseph Hospital in Eureka as a consultant in November 2005. He was asked to serve as interim CEO of St. Joseph and Redwood Memorial Hospitals in January 2006 and accepted the job full time with St. Joseph Health System in September 2006.

Klockenga said recruitment of a new CEO will begin shortly with the goal of having a new chief executive in place by early summer.