With construction of Wal-Mart at Eureka’s Bayshore Mall well under way, it’s perhaps more accurate to say “Wal-Mart is here” instead of “Wal-Mart is coming.” But even though the world’s largest retailer is mere months away from flipping the switch on its latest money vacuum, Humboldt residents continue to sound the “Wal-Mart = Bad” alarm.

This past week provided a couple examples of up-in-arms Humboldtry. On Thursday afternoon, students gathered in front of HSU’s Career Center to protest a scheduled visit from Wal-Mart representatives to offer employment information.

“WAL-MART… HAS NO HEART!” was the most popular chant of the day as protesters held signs and banners and invited passing students to scrawl out their own anti-Wal-Mart sentiments. One sign read “Say ‘hello’ to Wal-Mart and ‘goodbye’ to Richardson Grove & the Redwood Curtain.”

“If you have to hide what you’re doing, it’s probably not something right!” protester Jesse Hughes-MacArthur yelled, referring to Wal-Mart’s stealthy Humboldt introduction. “The invasion of Wal-Mart is coming.”

But on top of Wal-Mart opposition, the protesters' beef extended to the Career Center itself for allowing the retailer a location to seduce job-hungry students.

“Wal-Mart is using our Career Center,” Hughes-MacArthur said, going on to list a few of the corporation’s policies he found atrocious and voicing disapproval for HSU’s “promotion” of the 200 job “opportunities” that would soon become available.

“This school is supposed to be committed to social and environmental justice,” he said. “It should not be involved.”

Career Center counselor Loren Collins saw the decision to allow Wal-Mart on campus as an issue of protecting access to Wal-Mart employment for students who might desire it.

“Regardless of how we might feel, there are students on campus who want the opportunity to work at Wal-Mart,” Collins said. “We can’t make that value decision for them. We have to allow them access.”

While more protesters glommed onto the movement outside, inside Wal-Mart reps met with interested job seekers in a Career Center conference room, fielding questions and guiding them through the online application process. A few protesters sat in and asked pointed questions about Wal-Mart’s business model and ethics which the reps, at first, attempted to give credence to. 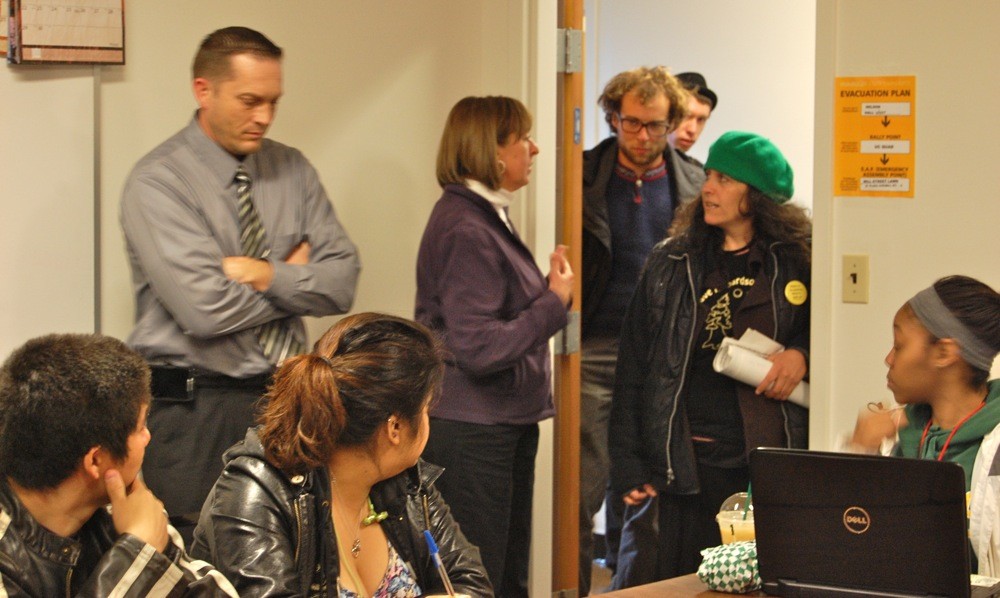 And then Verbena poked her head in the door.

“Are you from Wal-Mart?” she asked a man in a tie. He told her he was and then continued answering a student’s question about the permanency of the positions being offered.

“Then you can go on welfare and work your ass off at Wal-Mart!” Verbena chimed in.

“There’s a lot of jobs that will go away when Wal-Mart gets here,” one protester offered.

“Well, I’ve been looking for a job and I can’t find one!” one upset job-seeker replied.

“I can get you one at Arcata Pizza and Deli,” the protester fired back.

“I think it’s very nice that we have companies that come to our school to provide us with something,” job-hopeful Jody Bivians said, rising to her feet.

“They’re going to ruin where I live,” Verbena pleaded Bivians.

“Are you going to pay my bills?” Bivians inquired, sharply. “No!”

The shouting matches around the room continued, and by the time the gentleman sporting a monkey mask under a Wal-Mart baseball cap rolled into the meeting, all order was lost. Campus police arrived to attempt to calm things down. Eventually Career Center staff opted to move the session into a different room downstairs, behind a locked door.

“Are you really interested in a job at Wal-Mart?” Collins asked students as they entered the building. He used his keycard to unlock the door and usher in sincere seekers.

Inside the now-closed-door (but media allowed) meeting, reps shared their personal Wal-Mart stories with around 20 job seekers. One male rep inspired the young crowd by recounting his journey from an entry-level stocking position, to assistant manager, to being selected to be part of a team that traveled to India to open more Wal-Mart stores. As he spoke, potential employees filled out applications on their laptops.

Also in attendance, dressed in a smart business suit with neat, cropped hair, was Gabrielle Long, who will be the manager of the new Wal-Mart in Eureka. She was restricted by company policy from answering my questions that day. She instead politely gave me the number to Wal-Mart’s media relations department. (Y’all want it? It’s 800-331-0085.)

(Above: Gabrielle Long speaks with a potential job applicant.)

Outside the locked door, Collins deflected protesters’ complaints until well after the building had officially closed, and all who remained were Collins, Hughes-MacArthur and me. After a lot of philosophical back-and-forth the two found their common ground and apologized to each other for any misdirected heightened rhetoric. They shook hands and went their separate ways into Thursday night’s downpour.

Attendees at a separate anti-Wal-Mart shindig Sunday afternoon were a bit more restrained. Around 25 people gathered at the Ink Annex in Eureka for one of a couple of local screenings of Wal-Mart: The High Cost of Low Price.

“We’ve got cookies and popcorn,” event organizer Dorie Lanni said, motioning to the snack table as she met attendees at the door. Next to a bowl of pretzels sat a bowl of No Wal-Mart buttons.

The film was briefly interrupted by both a drummer practicing in an adjacent room and a projector malfunction. Afterward, Lanni asked for suggestions on how the community could respond to Wal-Mart’s impending Humboldt arrival and spoke of how she’s gauged local response thus far.

“It’s been pretty weak, which is not entirely surprising. But even if two people showed up it was still worth doing it,” Lanni said of the screening. “If people are seeing announcements, if they’re seeing flyers, then they know that there’s public opposition.”

Since there is virtually no hope of stopping Wal-Mart's opening in Eureka, Lanni said she’d instead institute an individual consumer boycott and hopes other will do the same. Instead of aligning herself with any established local political movement she hopes that the information she provides about Wal-Mart’s business practices will resonate with those likely to be affected most.

“If we’re out there like Occupy, then people just blow it off like, ‘Oh, this is some fringe/anarchist thing.’ And it’s not,” she says. “This affects mainstream families more than anyone else here.”

(Above: Dorie Lanni speaks before a screening of Wal-Mart: The High Cost of Low Price.)

UPDATE: Oh, by the way. Want to see how the construction progress is going inside Wal-Mart's new Bayshore Mall digs? The Journal's Bob Doran was recently granted access and used some shmancy app to construct the panoramic shot below. Use your mouse to get all 360 on it.