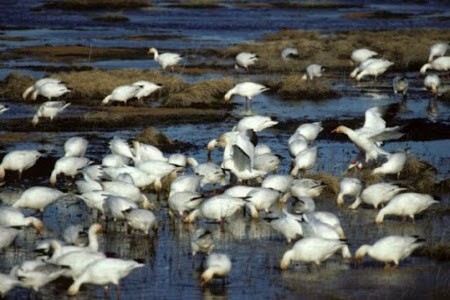 Surely it's been a wonderful Godwit Days so far -- rare larkspur sightings, perhaps a Scroobius Pip spotted lurking in the marsh. But there's been grave talk, as well, among the bird folk. Did you hear? As many as 20,000 waterfowl may have died in the Klamath Basin National Wildlife Refuge since February, victims of avian cholera.

The tragedy has been in the news for weeks. Most reports note how the bird deaths heighten the already contentious atmosphere surrounding negotiations between farmers, fishermen, tribes and environmentalists over Klamath River water rights and plans to take out four dams to restore the river. As the Capitol Press put it, the bird deaths "have fueled the latest round of posturing over a landmark water-sharing agreement."

Today's S.F. Chronicle continues the narrative, quoting U.S. Fish and Wildlife Service spokesman Matt Braun as saying that more birds than normal migrated through this spring at a time when only about half the refuge had water, much of it having been consumed already by those in line ahead of them -- fish, tribes, farms. The birds crowded into the wet places where they more easily spread the disease.