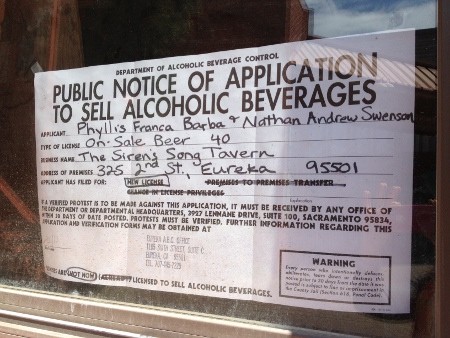 Sailors, merchants, workerbees, all: Stuff your ears with bees wax or tie thee to the mast of your sane life, because here comes The Siren's Song.

OK, you've got a few months before the "danger" arises. By August, business partners Phyllis Barba and Nathan Swenson hope to open their new tavern, The Siren's Song, on the bottom floor of that brick beauty in Old Town Eureka known originally as the Healy Brothers Building, on 2nd Street between D and E. Prior to a long hiatus that culminated in 2010 with a jarring earthquake, the 1908 structure housed the Old Town Bar & Grill. The building was doomed for demolition after the quake, until Kurt Kramer and his Kramer Investment Corporation bought it. Old Town regulars have watched and waited for more than two years as the building was gutted and rebuilt.

The work continues. But new planters have emerged on one side. New windows have been installed. And now an ABC license application to sell beer has been posted in a window -- signs of the first tenant.

Barba, reached today by phone at Accident Gallery where she's part owner, said she and Swenson (a soils science lecturer at Humboldt State University) plan to offer local and regional craft and microbrewed beers on tap and in bottles, as well as specialty Belgian and sour beers from Europe. (They're not brewing their own just yet.) They'll have six packs, too, for sale and will serve a limited menu from Arise Gluten-Free Baking Co. plus more yummies possibly from Loleta Bakery, Henry's Olives and other local food producers.

"The decor is going to be reminiscent of Victorian nautical Eureka history -- a lot of redwood fixtures and furniture from that era," said Barba. And the name? To lure you in, of course, with the irresistible song of hops and yeast so that you will "never want to leave and will just keep drinking beer."

There's lots of work to do before this can all take shape, however. Chris Mikkelsen, Kramer project coordinator, said the next step is to complete the floor plan for the tavern and then apply for a building permit. Once that's in hand, they can build up the interior.

Kramer Investment Corp. is in talks with other potential tenants but nothing's firmed up yet for the other spaces in the building: two other retail suites on the bottom floor and several office suites on the second and third floors.

Mikkelsen says Old Town's been luring all sorts of businesses lately, and empty storefronts are filling up: Restoration Hardware's old spot will become Sassafras' new home; a new restaurant's going into the old Hurricane Kate's, The Local is in the former sushi place, the Vance is nearly full, and so on.