M. Night in the Classroom

You've undoubtedly heard that the famous director M. Night Shyamalan was in Humboldt recently making a movie called After Earth with the famous actor Will Smith and his son Jaden. You may have read, in passing, about the director's visit with a group of young, local filmmakers. Here's the inside story on that close encounter, written by one of the students, Ciara Cheli-Colando.

This last Tuesday, the Eureka G.U.L.C.H. Teen Filmmaking class received unexpected guests: M. Night Shyamalan, with his wife and daughter. Shyamalan has written and directed major motion pictures including The Sixth Sense, Signs, The Last Airbender and The Village. He had just finished a day's shoot in Southern Humboldt, and he came and spoke with us for about 45 minutes at the invitation of our teacher, Nathan Davis-Floyd, before having dinner with his family.

Classmate Skylar Anderson asked the director how he had gotten from being where we are to where he is now. In response, Shyamalan shared successes and flops he'd encountered along the way, such as the time he sold two screenplays at once and had to choose which one to make, that his first movie in India closed two weeks after it opened, and told us of his antagonistic first meeting with Leonardo DiCaprio, which later led to a good friendship.

I asked Shyamalan what inspired him to write. He answered, "Writing is a form of empowerment for me. I don't like to be a victim." By writing, he empowers himself to continue. (And shouldn't we all?)

Shyamalan spoke about Labor of Love, which he said was a love story to his wife that was sold to 20th Century Fox, but was never made. The director said that he often writes about himself, and that his wife appears in many of his stories. His wife, Bhavna Vaswani, interjected, "In which he often kills me off..."

Shyamalan used the G.U.L.C.H. classroom as an example to verbalize how he thinks when he is directing. He rattled off the physical attributes of the room and how they would affect his shooting, e.g. the color of the walls in relation to costumes, and placement of characters in relation to the plot.

He spoke about the responsibilities of directing: about working with Jaden Smith, and tracking the length of the day in relation to child labor laws, and when to listen to the DP (Director of Photography) about lighting issues, and when to just keep rolling. He also spoke about having final cut, which is the authority of a director to make the ultimate decision regarding any aspects of a film.

above: Mr. Shyamalan with the filmmaking class, the Fresh Voices singers and G.U.L.C.H. staff.

Just getting to meet such a highly respected director was an incredibly valuable experience, but even more so was getting to speak with and ask questions of that director. What Shyamalan did was very generous, and I believe will inspire us to reach farther, dream bigger, and keep on writing. As G.U.L.C.H. coordinator Brian Millet said, "This was a once in a life time opportunity for these teens who are aspiring writers and filmmakers, to be able to pick the brain of somebody who has achieved the ultimate level of success... The fact that we were able to surprise the teens made the whole experience even better."

Our filmmaking class is made up of nine teens ages 12-17 who are learning to script, direct, shoot and edit our own short films. We come from McKinleyville, Arcata and Eureka High Schools, NPA and St. Mary's, and home-schools. Some of us are making movies for the first time, while some are well versed in the process and are ready to branch out into more advanced editing and effects techniques. Under the instruction of Nathan and Brian, we are creating our own 90-second vignettes reflecting the lives of today's teens. Our vignettes will be strung together to create a portrait of modern teenagers today. For more info on Growing Unity, Leadership, Community and Health (G.U.L.C.H.) workshops and programs, call 441-4240 or visit facebook.com/gulchteenprogram. 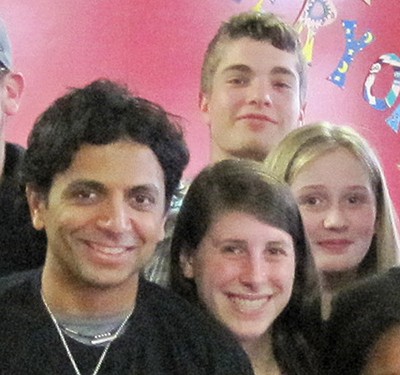