On 05-13-2012, at approximately 4:00 a.m. the Humboldt County Sheriffs Office received a call regarding threats being made from Shawn Hass. Deputies responded to the Brass Rail Motel, 3400 Block of Redway Drive, Redway to meet with Hass. 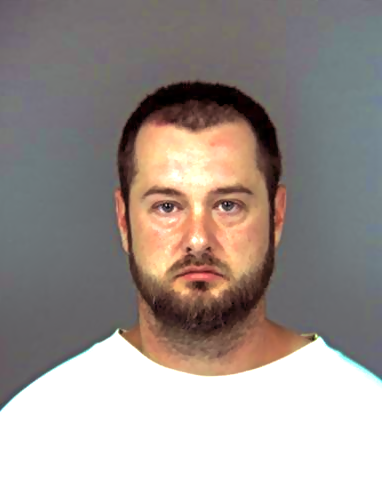 When the deputies arrived they saw two males standing in the motel parking lot. One of the males, who was later identified as Shawn Patrick Hass, 35 years old, a transient, spontaneously told the deputies, “ I just stabbed him ” while pointing to another male who was sitting in a lawn chair being attended to by a female. Deputies saw Hass’ shirt had blood covering the front of it. Hass was immediately detained while the deputies called for medical assistance for the injured male in the lawn chair. Deputies saw the injured 22 year old male from Redway, had a deep neck wound and later learned he had approximately 15 stab wounds to his chest, shoulder, neck, throat, cheek, back and thigh. The victim was unable to give a statement due to the extent of his injuries.

When deputies interviewed Hass he told them he called the Sheriff’s office because he was sleeping in his van on Empire Street, Redway when someone verbally threatened him regarding where he parked his van. At one point during the confrontation he and the person threatening him got into a brief struggle. He told the deputies he, (Hass) had a knife in his van which he used to fend the attacker off. Hass drove his van a short distance away, but the person kept coming after him. He drove to the Brass Rail Motel and exited his van to use the telephone at the hotel to call law enforcement. While at the motel, the victim was standing in an upstairs in a hallway and leaned over the railing and asked Hass if he was stalking his female friend. Words were exchanged and they got into a physical fight. Hass admitted to stabbing the victim during the fight and claimed it was self defense. Hass was uninjured.

Deputies recovered a throwing type knife, approximately nine inches long at the scene which was believed to be the assault weapon.

The victim was airlifted to an out of area hospital for treatment. He is currently in “fair condition” and still hospitalized. Hass was arrested for attempted murder and booked into the Humboldt County Correctional Facility. His bail was set at $500,000.00. The case is still under investigation by Sheriff’s Detectives.