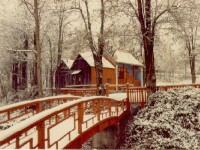 Another state park treasure has been rescued from closure heap, and this one's close enough to home -- just a pretty jaunt down Highway 299 -- to warrant notice: the Joss House Historic Park, in Weaverville.

The nonprofit Weaverville Joss House Association has agreed to raise at least $47,000 every year, which will help the state keep the park open at least two days a week. They've raised the money for 2012, and a couple thousands have been donated already for the coming years (by Ass. Wes Chesbro and the Weaverville Lions Club).

A news release sent out by the association noted that State Assembly Speaker Pro-Tempore Fiona Ma's connections with "the Asian community across California" were key to raising the funds for this year.

The Joss House is a Taoist temple of worship -- and the oldest continuously in-use Chinese temple in California. You can read about it on Trinity County website or the state park's website.