In what seems to be a stunning, unprecedented coup d'état, 2007 Rutabaga Queen Emma Breacain, who also serves as Treasurer on the board of directors for Kinetic Universe, will now serve as "this year's Rutabaga Queen," according to a report in this morning's Times-Standard. This last minute shift in the Kinetic power structure comes just one day before the annual Kinetic Grand Championship is set to "spin into gear."

[Queen Emma is shown here in a 2007 photo, perhaps plotting with the late Glorious Kinetic Founder Hobart Brown, who seems shocked by her proposal.] 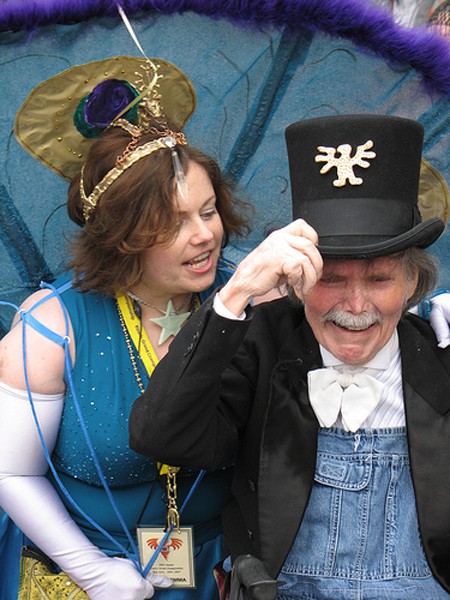 Ironically, Queen Emma "The Emchantress" was part of the group of Kinetic royalty that elected and crowned 2012 Rutabaga Queen Wendy "Sohotshe" Burns last weekend at the official Rutabaga Ball. It is uncertain at what point this affront to democratic transfer of power took place. Asked for a comment via Facebook message this morning, Queen Emma has so far declined comment. The whereabouts of rightful Queen Burns are unknown.

Update: In a bold admission of guilt, Queen Emma noted to Queen Burns (on Facebook), "Hey, looks like I'm getting a second reign, compliments of the Times Standard!"

Her official comment to the Journal, began with an evi laugh. "I have been planning my triumphant return for so long," she admitted, adding, "Sorry, Sohotshe, age and treachery always trumps youth and skill!"

[The rightful Queen is shown below just after receiving her crown.]