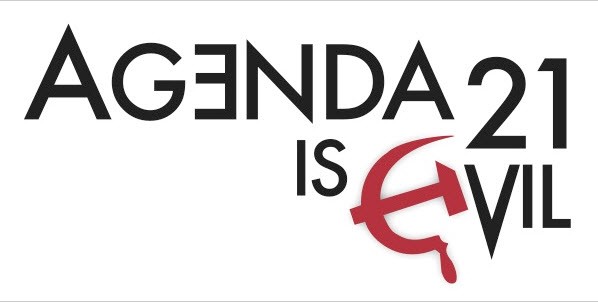 [Update, 6/12, 9:52 a.m.: Yesterday the Journal sent an email to all county supervisors and supervisors-elect seeking comment. Supervisor Jimmy Smith responded this morning: "I haven't been contacted by the United Nations ... however, if I do hear from them I will happily convey their questions or comments."]

It's not surprising to see public discourse devolve into the hyperbolic as we approach the final stages of the county's general plan update, but an opinion piece in yesterday's Times-Standard goes full tilt, Glenn Beck-caliber nutso.

The piece was written by Kay Backer, a Rob Arkley-funded lobbyist representing the pro-development interest group Humboldt Economic and Land Plan (HELP). In her screed, Backer claims that the county's staid, bureaucratic planning commission has secretly been using a Cold War mind-control technique on the unsuspecting public. Their goal? Backer suggests that our mild-mannered commissioners are complicit with United Nations operatives bent on establishing a single "World Order/Global Governance."

This particular conspiracy theory is not Backer's own creation. It concerns Agenda 21, a 20-year-old action plan designed to encourage environmental sustainability. Signed by the leaders of more than 178 governments (including George H.W. Bush), the plan relies on voluntary implementation by member states.

Glenn Beck sounded the alarm last year, claiming that the term "sustainable development" is actually code for "centralized control over all of human life on planet Earth." The ultra-conservative John Birch Society drafted a resolution for the upcoming Republican National Convention in opposition to Agenda 21, calling it "a comprehensive plan of extreme environmentalism, social engineering, and global political control."

Backer gives over more than half of her opinion piece to an extended quote from Rosa Koire, a "forensic commercial real estate appriaser" from Santa Rosa who helped found a group called the Post Sustainability Institute. Koire explains how local governments use something called the Delphi technique to brainwash people into believing in such nefarious concepts as smart-growth, environmental stewardship and energy conservation. "This is war," Koire declares.

Apparently it's too late for Supervisor Mark Lovelace. The brainwashers must have gotten him long ago, because this is what he had to say about Backer's opinion piece:

"It's really sad to see that the opponents of good planning are willing to go so far to use fear and misinformation to divide our community. It's really sad."

Lovelace denied having any contact with the U.N. and claimed that the general plan update has instead been influenced by local residents and interest groups -- "of which Kay Backer is one."

The plan update, he said, has been shaped by 11 or more supervisors and all of their planning commissioners and has incorporated public input from hundreds of meetings going back to 2000.

"It's been long enough," said the brainwashed Lovelace. "It really is a remarkably cohesive product of a very diverse board of supervisors and their appointed planning commissioners."

All undoubtedly under the spell of U.N. hypnotists.