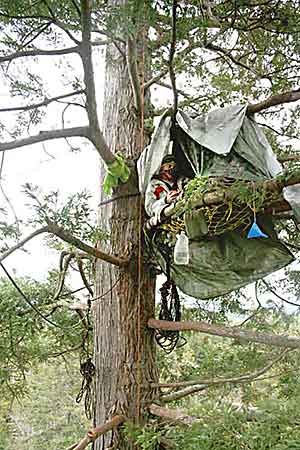 Remember the McKay Tract tree-sitters? The straggle of folks who began ascending redwoods on Green Diamond Resource Company's forested property near Cutten four years ago to save them from being harvested?

No? Refresh your memory here -- don't worry, it's not just a logging tale, it's a development story, a conservation story, a horse story, a what-do-we-do-with-our-backyard story.

Well, today, June 18, Earth First! Humboldt, is claiming to have prevailed over the timber beast because Green Diamond recently sent a letter to CalFire, the timber harvest overseer, saying it was closing its harvest plan for that area.

"These trees would have been logged in 2009 if we hadn't gone up there, and the threat remained until now."

The tree-sitters' release notes that Green Diamond "is close to signing a deal to sell roughly 2,000 acres of the western McKay Tract to the Trust for Public Land."

Well, that's true: The Trust and Green Diamond have been talking for some years now about what to do with some of that forest. The Trust wants to manage it as a community forest -- a function it already serves for numerous merrily trespassing, and sometimes permission-bearing, neighbors.

We emailed Gary Rynearson with Green Diamond asking him if it's true the tree-sitters saved the trees -- because, the timber harvest remained in place during the negotiations with the Trust -- and he replied:

"We have been working with the Trust for Public Land and the County to develop a peaceful solution for the future of the McKay Tract. We are currently working on a four year option agreement ... that will include the opportunity for a county-owned community forest on the western side of the tract, and a conservation easement that would preclude future development on the eastern side of the property. The trees that have been occupied by the tree sitters are included in the area that would be included in the potential community forest. We therefore decided it made sense to close the out the timber harvesting plan without further harvesting activity. We informed the tree sitters of our decision last week."

So there you have it. A peaceful solution.