Where is Dave Chappelle? Would you believe Fortuna?

The reclusive stand up comedy legend repped a black, stoner-font-emblazoned "Humboldt" sweatshirt when he was spotted by a few local residents in Fortuna's Starbucks on Wednesday evening.

The one time "Chappelle's Show" star and a friend were taking a break from their motorcycle trip up Highway 101 and struck up a conversation with Mikkei Fritz, an actor from Oregon who was in town visiting his cousin,  Frank Florvilus, and Frank's wife, Ashley Florvilus. The following is Mikkei's first-hand account of the momentous run in:

"We greeted each other while I was at the register. I asked if he has been around traveling and he said, "Yea. I'm just taking my time and making my way up north as I find myself." He didn't say what his final destination was going to be. Then we started talking about my job at the Oregon Shakespeare Festival. He asked what shows and roles I was in. I told him I was Balthazar in Romeo and Juliet and I played a cheerleader in The Very Merry Wives of Windsor, Iowa. I really hope he remembers all of it and stops by Ashland to watch me in a show since he is traveling north. He ordered a regular coffee with cream. As I was leaving I asked if I could get a quick picture and he didn't have a problem with that. The last thing he said to me was, "I don't even know you, but I already know you're a great guy, a better guy than me." We laughed and shook hands and said goodbye to each other."

There you have it, Humboldt. If you had only been in Fortuna last night ... If possible, try to limit your "I'm Rick James, beitch!" comments to one per person.

Above photo used by permission courtesy of Ashley Florvilus. Thanks, Ash.

UPDATE 12:24 p.m.: Well, well! Another facebooked photo has surfaced from Mr. Chappelle's pitstop in the Friendly City. This one, courtesy of Victorian Bath and Body co-owner Sara Pleshakov, was clearly taken in front of Fortuna's stucco-wonderful Strongs Creek Plaza. (Click the photo to biggify.) Double proof! 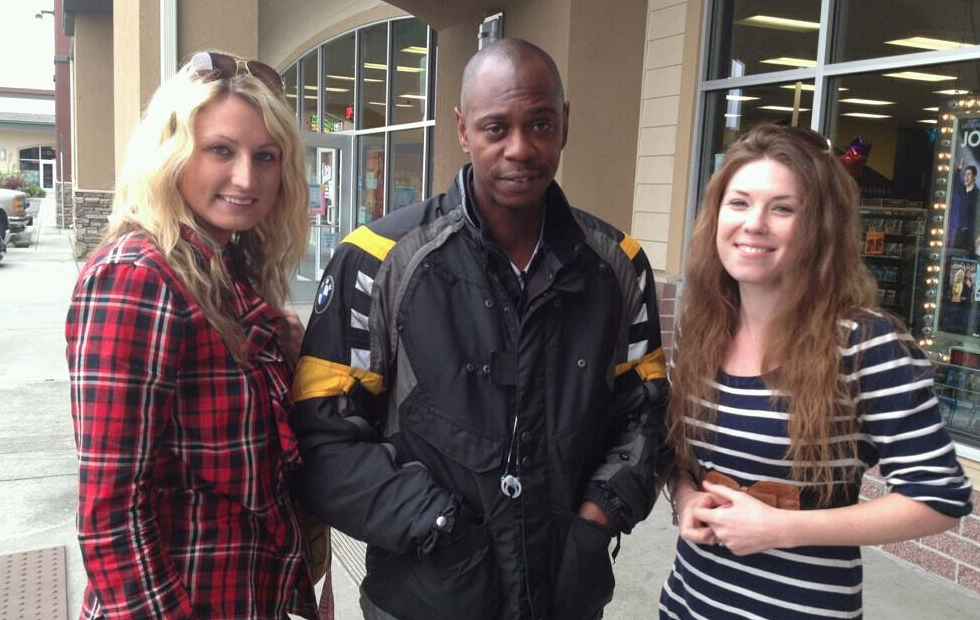 "Dave Chappelle asked where we were from and we said "Palo Alto or Shallow Alto" and he laughed and said, "I like that you girls are funny." So I guess now I can say I made Dave Chappelle laugh."