UPDATE #2: On Friday evening, LaRue sent a statement to the Journal, saying in part:

I wish to offer my sincerest apologies to the two women Jen Ables and Maral Attllah [sic]. I would like to assure them that I meant them no harm, and am truly sorry that I put them through an experience that made them feel unsafe in their own home and community. ... My actions in the morning hours of Aug. 18 are indefensible, and embarrassing. All I can do is ask these two women, and the community for forgiveness.

See his full statement in the comments section below. 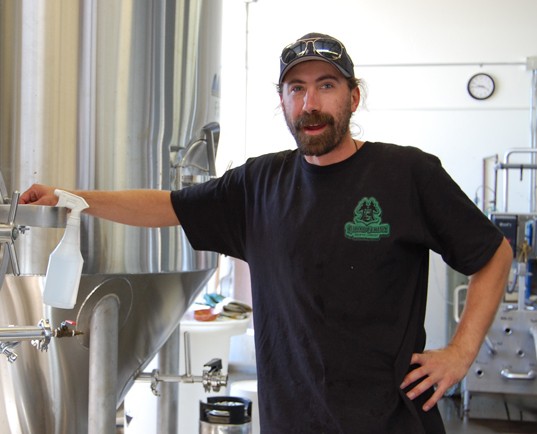 UPDATE #1: LaRue has submitted a letter of resignation from the planning commission to city staff. The city council is expected to accept his resignation at its Sep. 5 meeting.

Eli LaRue, the 32-year-old co-owner of Redwood Curtain Brewing Company and a recent appointee to the Arcata Planning Commission, has been charged with public drunkenness and violating his probation after reportedly trying to break into a house in downtown Arcata last weekend, terrifying the two women who'd been sleeping inside.

Arcata residents Jen Ables and Maral Attallah say LaRue repeatedly and violently tried to break into their home in the wee hours of last Saturday morning, damaging a window screen and nearly kicking in a side door, even as they yelled at him to leave. [Disclosure: I've met both women in passing at social gatherings, but neither is a close friend.]

LaRue was appointed to the city's planning commission last Wednesday. Via email, he declined to comment on the incident.

In a phone interview, Ables said she was awakened shortly after 4 a.m. by her dogs' frantic barking. Suspecting cats or raccoons, she peered out the window but saw nothing. She then heard a series of thumps, like someone putting things away in a closet, Ables told the Journal. She assumed it was Attallah; the two women's bedrooms share a wall.

"The dogs were just barking, barking, barking," Ables said. "I was starting to feel a little irritated. I couldn't go to sleep. Then I hear what sounds like her windows opening and closing, so I said, 'Hey, Maral, c'mon.' Then everything stopped."

Attallah, meanwhile, was asleep in the living room, where she'd drifted off in front of the TV hours earlier.

Ables went back to bed, only to be woken 20 minutes later by more thuds, more barking. She got up to investigate.

"Right when I came out of my room I heard a big boom," she said.

"I knew immediately someone was trying to break into the side door," Attallah said. "The windows off of the kitchen shook. The whole house shook."

Ables was terrified, but Attallah remained level-headed, telling Ables firmly but calmly to go back to her room -- someone was trying to break in.

"I just screamed 'cause I got really, really scared," Ables said.

Attallah told her to call 911, which she did, begging the dispatcher to hurry. Attallah then approached the side door and peered through its glass panes, catching a glimpse of LaRue, she said. Two more kicks. The door shook with each impact but didn't give.

A few years earlier, after some disoriented drunks had also tried to enter their home, the women had installed new deadbolts. Now, that thumb-sized stub of metal held their door firmly to the jamb.

Attallah called out to Ables, loud enough for the man outside to hear: "Get the shotgun! Get the handgun! Anyone comes to the door you shoot."

On the other side of the door, LaRue responded by muttering, "Hey," Attallah recalled.

She declined to say whether she actually owns a shotgun and a handgun. "I believe in my Second Amendment rights. That's what I feel comfortable saying."

Nearly hysterical with fear, Ables returned to her room and grabbed a small baseball bat. LaRue, she said, continued kicking the door. Attallah recalled what happened next:

I yelled, ‘I have a shotgun! You need to leave!' He said, ‘Hey, I'm comin' in.' That's when I said, ‘I will blow your fucking head off.' At that point he stopped. He stepped down off the porch. Then he turned. He was looking toward the back yard. I went up to the window to get his description. I moved the blind and I could see him perfectly. I could see everything as clear as day.

As LaRue walked away from the door, Attallah described him aloud to Ables. He climbed nimbly over the chain-link fence that surrounds the side yard and then fled, Attallah said. Arcata police officers arrived almost immediately thereafter and apprehended LaRue.

Both women feel that LaRue should have been charged with more than just public drunkenness, which is a misdemeanor and, for LaRue, a parole  probation violation. (Last year he pleaded "no contest" to misdemeanor driving under the influence.) Ables in particular says she was traumatized by the experience.

"All weekend I'm fucking terrified out of my mind, [wondering], 'Is the guy coming back? What did he want?'" Ables said. "Even after finding out who he is, I'm still scared. That sucks. I still can't sleep. He took away that sense of security at home. That's not fair."

Arcata officials would not release any details about the incident to the Journal, but the women said they were told by Arcata police officer Bob Martinez that LaRue had a blood alcohol level of 0.214, nearly three times the legal limit. Officer Martinez also told them that LaRue thought he was at his own house, and that he was too drunk to be charged with a more serious crime, such as vandalism or attempted burglary, according to Attallah and Ables.

Both women are frustrated. "It feels like we were really terrorized," Ables said.

But according to UC Davis Law Professor Gabriel "Jack" Chin, it is difficult to convict a person who was that drunk of a "specific intent" crime -- "that is, one where you have to have some particular purpose, motive or resolve, like burglary," Chin said.

California Penal Code Section 22 states that voluntary intoxication won't get you off the hook for any criminal liability, but it can be used as a defense to argue that you were too hammered to commit a "specific intent" crime.

"Now, does that mean a jury would necessarily accept [that defense]?" Chin asked. "No. Those sorts of mental state defenses are often rejected, and some states have abolished them by statute." But California is not one of those states, and Chin said other factors are often considered, such as whether or not the suspect has committed violent crimes before.

Ables said the Arcata police department tried to put her at ease by telling her that LaRue has no history of violent crimes.

After hearing the details listed above, Chin said he understood why LaRue wasn't charged with anything more serious. "Drunk in public does sort of cover the situation you're describing to me," he said.

Attallah and Ables disagree. They say LaRue seemed coherent -- climbing over their fence, responding to them verbally and kicking the door even after he'd been threatened.

"He knew people were home; he knew there were dogs; he heard female voices. ... To me, there's some intent there," Attallah said. She believes that the charges against LaRue trivialize the severity of the experience. "Let's be honest here: Giving someone a drunk in public? That's a slap on the wrist. And with somebody who owns a brewery? That's almost a badge of honor."

The women have since upgraded the security in their house, but Ables is still shaken up. "I feel so bad for Jen; she is so traumatized," Attallah said. "Any little movement around the house she thinks someone is trying to get in."

Arcata police officers returned to the women's house Thursday morning to inspect damage to the house, including a bent window screen and splintered door jamb.