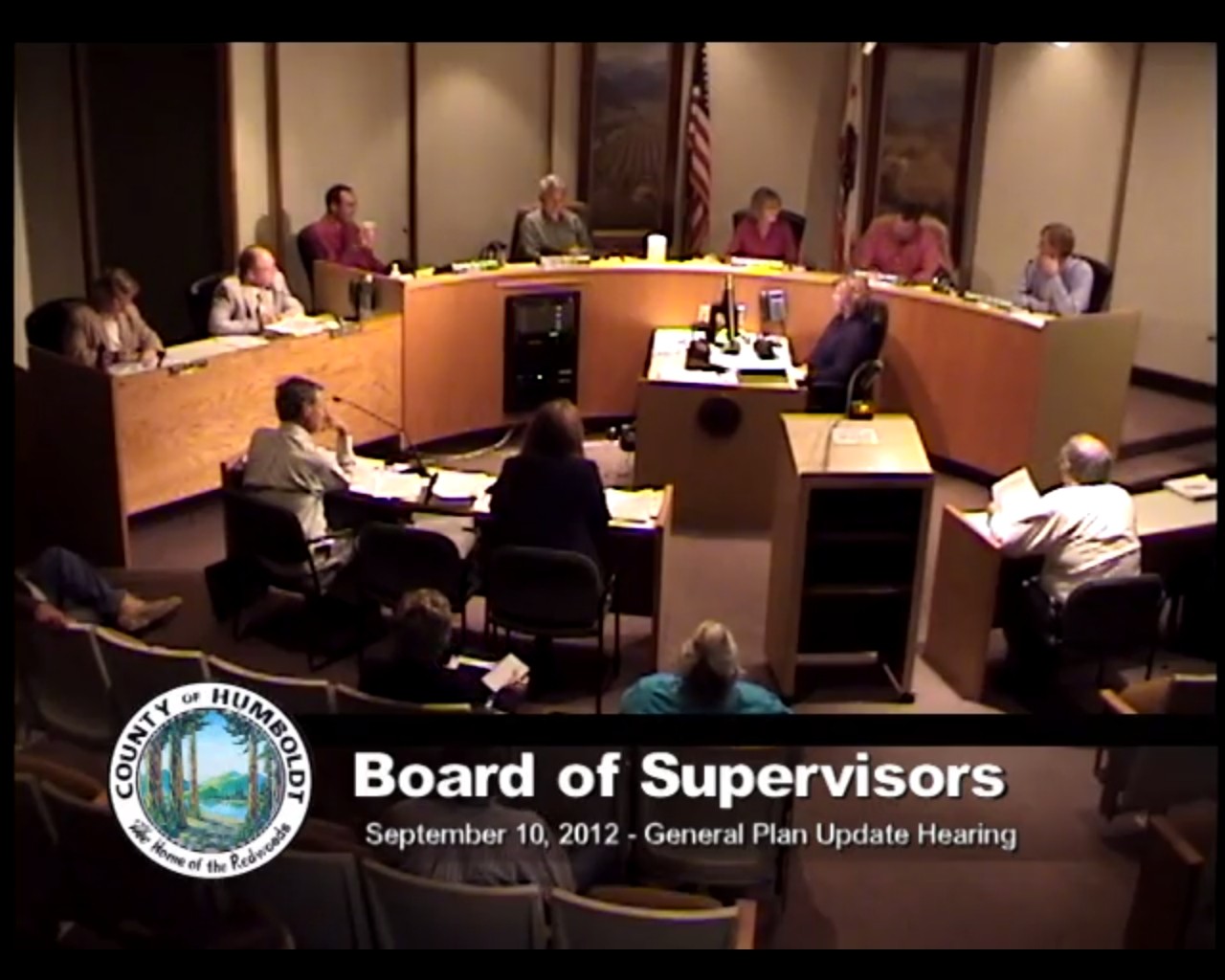 The video of Monday's contentious general plan update meeting of the county board of supervisors is now available for viewing (here). If you have the time it's well worth your while.

The original report* on the meeting mentioned a handful of reasons offered by the board's new conservative majority -- Ryan Sundberg, Rex Bohn and Virginia Bass -- for throwing the switch to derail the general plan update process, now in its 13th year. But as the full video reveals, over the course of the meeting this trio of supervisors suggested a wide variety of excuses for undoing much of the work that's been done so far. Here are the ones we caught. (The relevant debate starts around the 84-minute mark.)

"I guess the more I look at this the more confused I get. ... It's super-overwhelming to me, I know, to try to go through this thing and understand it. The more I read it, it seems like, the more backwards I get. So [Bohn and I] met with [Interim Planning and Building Department Director] Martha [Spencer] to ask, is there a way we can bring this thing down to something digestible ... basically take the [1984] framework plan, is what we talked about, and then making it up to state code [emphasis added]."

"I wished I had the knowledge that, I mean, that Mark [Lovelace] had. He's got to work on this for 12 years. I'd like to have some of that knowledge so maybe I'd have a little bit of understanding."

2. Though nearly complete, the updated plan might somehow cost more money than scrapping it and starting over

"I don't know if we can afford the plan that's here. I think we can afford a Yugo and I think we're building a Cadillac sometimes with all the extra addendums and everything else when we just need to worry about the state and federal mandates."

"Getting all this paper and documents at one time and trying to digest it and know what's in it and be able to look somebody in the eyes at the end of this and say, ‘This is not going to affect your property rights. This is doing what we want it to do' -- I just don't know how I can get there with this."

"We gotta start a new plan in a year anyway."

"I'm worried that at the end of this it's gonna be sued, [though we'll] probably get sued anyways."

"I don't want to make it the lawyers' full-employment plan."

6. The update and its supporting documents have too many pages

"This just is so big. I had a conversation with [former county supervisor] Jill [Duffy] this morning and asked, ‘How did this thing get this big?' ... Is there a way to pare it down to make it more understandable for me, for the general public, for people who are going to come in and get permits?"

7. Despite holding more than 200 public meetings, the county didn't give people in rural areas enough opportunity to comment

"The one thing I got out of so many meetings, there's always somebody to get up and says, ‘You haven't come at the citizens advisory committees.' That pops up, and I'm just grabbing it ‘cause it's in my notes in about three places. We heard from Mattole and Honeydew. They didn't feel like they were included. ... I don't know what we did in Willow Creek, Orleans and the outside areas."

"What my uncomfortableness at this point, especially when you, you know, we're looking at the document, we have asked for so much information ... but what I don't have in there, and I have never really asked or we haven't really been able to get to the bottom of, which really rises to my radar today is, again, the unintended consequences and my needing to have a level of confidence in moving forward."

"The level of governance -- how much more bureaucracy are we throwing in on top of this?"

Members of staff, along with Supervisors Mark Lovelace and Clif Clendenen, attempted to address this dizzying barrage of complaints. Lovelace said breaking the plan up and addressing its individual elements piece by piece, as Sundberg suggested, would be impractical since the elements are all interrelated. Spencer added that breaking the process up would only make it longer and more complex, since each piece would require a separate environmental impact report. Addressing concerns over litigation, she said breaking the plan up would be far worse. "Your board is always subject to more litigation the more environmental documents we do."

Lovelace addressed what he saw as the core issue:

"The hardest part isn't the process, isn't the policies. The hardest part are the issues. These are hard issues. And if you're waiting for somebody to be able to say we have policies that fully protect all of the resources while also fully protecting all of the property rights, I don't think that's gonna happen. This is a balancing act, and it's gonna tilt this way on one policy, that way on another policy. ...

And when I say that that's what we signed on for, it's the nature of the job is that we have to make some really tough decisions that some people are gonna like, some people aren't gonna like. Sometimes our friends are gonna pat us on the back, sometimes they're gonna stop returning our calls. ... Nothing gets at the difficulty of our job more than trying to balance their property rights with their neighbor's rights and with the environment and with these other issues.

Phillip Smith-Hanes, the county administrative officer, sounded a similar note. "Land use decisions are among the most controversial that a governing body gets to make, and the general plan in particular is a mountain," he said. "And, I mean, there's no way around it."

As the meeting's designated end time approached, there was widespread confusion as to what exactly the trio of conservative supervisors was asking of staff. "I guess I'm a little bit lost," Spencer admitted.

Lovelace said he hadn't heard a request for any information that isn't already included in the current draft. In an apparent effort to alleviate the confusion of his colleagues, he made a motion to direct staff to prepare a workshop for next week's meeting, a sort of "Planning 101" session to discuss the process at hand. No board member would second the motion, and so the board agreed to continue the discussion next Monday, starting at 1:30 p.m.

Of the various plan-scrapping justifications mentioned at the meeting, the most familiar is No. 3 above, the concern over private property rights. This is the raison d'être of a number of shadowy, development-friendly groups trying to influence the general plan update, including the Humboldt Coalition for Property Rights, Sunshine for Humboldt and the Humboldt Economic and Land Plan (HELP).

The latter is run (seemingly entirely, at this point) by Sacramento lobbyist Kay Backer, who on Tuesday sent a letter to board chair Virginia Bass expressing her satisfaction with the previous night's performance. (The letter can be read in pdf form here.)

"We were pleased to see your Board decide to step back and consider various options for moving forward with the General Plan update," Backer writes.

She also offers a familiar-sounding suggestion:

"HELP, and others have long recommended going back to the Framework Plan (existing General Plan), and updating it to comply with current Federal and State laws ... . If you choose this option, there is no reason why you could not evaluate the potential of adding additional elements at a later date."

Could these be marching orders? Or is it coincidence that Sundberg and Bohn's confusion and concerns led them to this very same idea?

Update, 4:15 p.m. If Sundberg's reason for objecting to the plan was truly confusion over the process, then he would seem to have missed a golden opportunity for clarification by failing to second Lovelace's motion. If, on the other hand, his purported confusion is merely a smokescreen designed to allow him and his fellow consservative supervisors to tilt the balance of the plan toward property rights, well, then he's bound to be disappointed by what county planning staff came up with for Monday's meeting.

While not quite as dumbed-down as Hank Sims's parody draft over at the Lost Coast Outpost, staff nonetheless took Sundberg, Bohn and Bass at face value and, logically, is offering to walk them through the major issues "in a narrative format."

*Footnote of very minor significance: Since the Humboldt Sentinel's story was posted Monday night, its publisher/producer, Charles Douglas, has ignored several requests to prove that "Thomas Bradshaw," the story's purported author, is a real person and not a pseudonym of his own creation. Douglas himself films most of the supes' meetings as part of a contract between the county and Access Humboldt, where he is a media production specialist.