It's Alive! El Pulpo fires up in Eureka 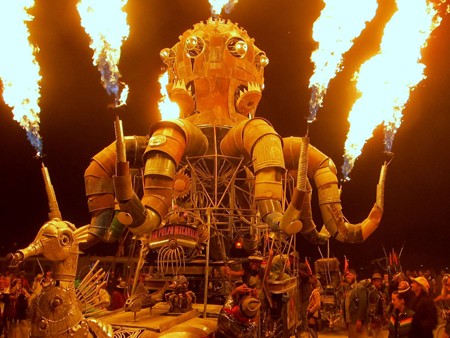 You've probably seen pictures of the fire-spewing octopus El Pulpo Mecanico created by Duane Flatmo and friends Steve Gellman and Jerry Kunkel for Burning Man. It was featured in a recent spread in no less than Time Magazine. The gigantic kinetic sculpture was built in a local warehouse, but it's never been fully assembled and operated here in Humboldt. You first chance to see El Pulpo in action comes Saturday during Arts Alive! when the octopus comes alive in the sculpture garden at the foot of C Street.

Flatmo sent us this note and some pictures:

The mechanical octopus El Pulpo Mecanico was built in Arcata; designed and created by artist Duane Flatmo -- the spectacular fire effects and electrical systems were created by Steve Gellman. Our good friend Jerry Kunkel came on board with his expertise in building and electrical to round out the group. 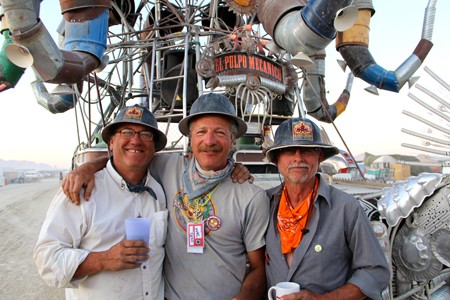 El Pulpo is a combination of art and technology melded together. We built this knowing that it would be fun to watch as the giant cam spun up through the center moving the tentacles and eyes in and out while fire spewed from the tentacles and head. No hydraulics or computers were used in this contraption, which stands 23 feet tall and shoots flames 35 feet into the sky. We built the sculpture primarily out of recycled and used junk found at our local scrap yard. A special thanks to Bonnie Connor who worked out a trade with us to have full access to her wonderful place: Arcata Scrap and Salvage. 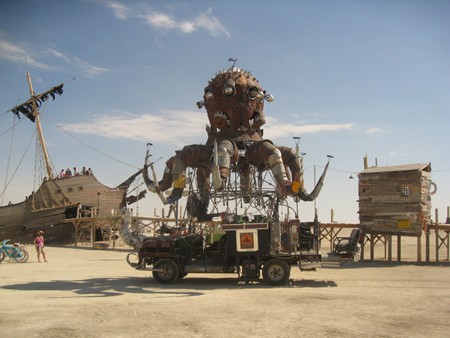 Don't miss this first time appearance in our town.

Where: the foot of C Street in Eureka near the waterfront.
When: Saturday, Oct. 6, between 6-10 p.m. during Arts Alive!

There should be something like a carnival atmosphere that night: Along with El Pulpo, there is the official debut of a new sculpture (as noted here earlier), Don's Neighbors will be playing music, and Eureka High is holding some sort of pep rally, all in the same general vicinity.