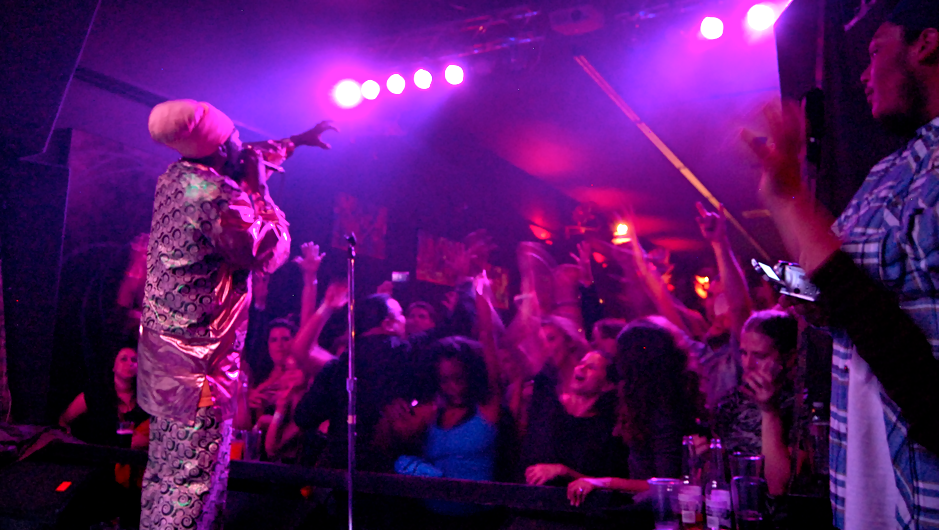 Above: Capleton performs at the Red Fox Tavern in 2010.

Humboldt County loves its reggae. Check our calendar section this or any week for proof. And it makes sense. Reggae's feel-good, pan-cultural message of "one love" jibes perfectly with our community's streak of irie idealism, to say nothing of the ganja connection.

But in recent years, the tumultuous social landscape in Jamaica has given birth to a more troublesome and controversial genre called dancehall. As the name suggests, dancehall music is infectious and beat-heavy. But where reggae's message was largely a unity-focused rebellion against the slavery and oppression in Jamaica's past, some dancehall reflects the country's modern, conflicted attitudes about race, masculinity and sexuality. It's often viewed as a backlash against the bourgeois utopian grandstanding of Jamaica's political leaders, and many of the genre's biggest stars, including Buju Banton, Bounty Killer and Capleton, have become notorious -- in Jamaica and beyond -- for performing songs that advocate violence against homosexuals. In Jamaica such violence is commonplace.

We've written about this issue numerous times. Whenever local promoters and venue owners have booked one of these offending dancehall artists, perhaps unaware of their gay-bashing lyrics, they've encountered passionate objections from the local lesbian, gay, bisexual and transgender (LGBT) community and their allies. These folks have threatened to organize boycotts of any venue that hosts a show by dancehall artists who've been identified as hatemongers. And those threats have proved successful: Several concerts have been canceled in recent years, leaving owners and promoters feeling bullied and prompting cries of "censorship" from disgruntled music fans ("Irie vs. Irate," March 4, 2010).

The issue has erupted again in the past two weeks. Capleton, a dancehall artist with numerous songs in his catalog calling for the murder and brutalization of gays, was scheduled to play a show at Eureka's Red Fox Tavern later this month. Under pressure from local activists that show was canceled, but promoter Beau DeVito of Bonus Entertainment soon announced that the Capleton show would be held at a different venue to be announced the day of the performance (see here).

Capleton apologists, including DeVito, offer a variety of defenses. They point to his May 2007 signing of The Reggae Compassionate Act, which declared that "there's no space in the music community for hatred and prejudice." However, Capleton was recorded singing gay-bashing songs later that same year. They claim that Capleton's lyrics are metaphorical or that they haven't been accurately translated from Jamaican patois, even though the message of these songs is plain. But their most common complaint, one that attempts to twist privilege into victimization, is that people in the LGBT community are trying to censor Capleton and thus, somehow, violating the First Amendment.

This argument is simply wrong.

Here's the deal: The First Amendment protects our right to expression free from government censorship. One of the consequences of this free expression, inevitably, is conflict. Short of threatening actual violence, such conflict comes with the territory of the First Amendment. Protests and boycotts are part of the deal, too.

Here's an analogy: Say you're at Thanksgiving dinner and you start making fart noises with your mouth -- you know, to entertain people. If your host tells you to shut up and stop being a dipshit, he's not infringing on your legal rights. If you're never invited back, that's not censorship. It's a predictable consequence of your behavior.

The date of the Capleton show, Oct. 11, happens to be National Coming Out Day, a celebration of people who publicly identify as gay, lesbian, transgender or bisexual. Humboldt County has a proud and vibrant LGBT community, and our county government includes that community in its non-discrimination policy. To my knowledge, no one has suggested that Capleton should be legally barred from performing here. But to many in our community, his invitation feels worse than an obnoxious fart noise at Thanksgiving dinner. When you stop to consider the violent consequences of homophobia (hate crimes against LGBT people, and those perceived to be LGBT, are more likely to result in death than any other kind of reported hate crime), the invitation feels like something much more offensive -- a clueless and insensitive provocation. Threats of a boycott are a predictable consequence of that provocation.