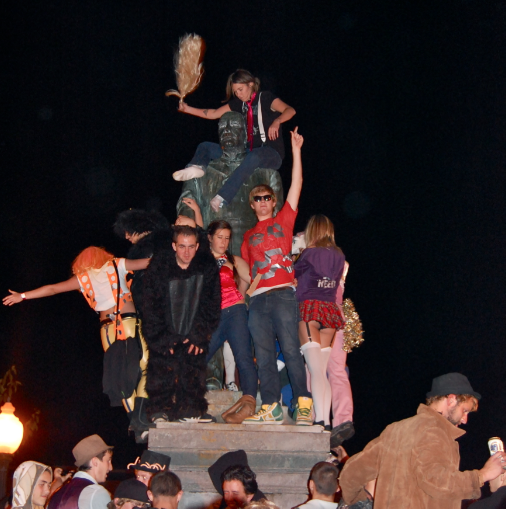 The art of McKinley climbing is in serious jeopardy.

Arcata Plaza frequenters will recall the increased law enforcement presence this past New Year's Eve when compared with previous years. Expect more of that. A press release issued today by the Arcata Police Department indicates that that approach to curbing the chaos will now extend to Halloween.

Due to the damage and criminal misconduct that occurred on the Arcata Plaza last Halloween, the Arcata Police Department has joined with other local law enforcement agencies to significantly increase police presence on the Plaza during Halloween.

Arcata Police Chief Tom Chapman said, “The destruction that occurred last Halloween cannot be tolerated. We will be actively enforcing all laws and have zero tolerance for any violations. The safety of the citizens and officers as well as the protection of property will be our top priority.”

In order to prevent graffiti vandalism, public urination, indecent exposure, and the illegal climbing of the McKinley statue, the center of the Plaza will be cordoned off. Entry into the center area will be strictly prohibited. The consumption of alcohol and the possession of glass containers are prohibited and will result in citation or arrest. The discharging of fireworks in or near a crowd of people is a felony offense and will result in immediate arrest. All laws will be strictly enforced.

The City of Arcata and Arcata Police Department wishes everyone a safe Halloween.

Sure, sure. But more importantly, this: