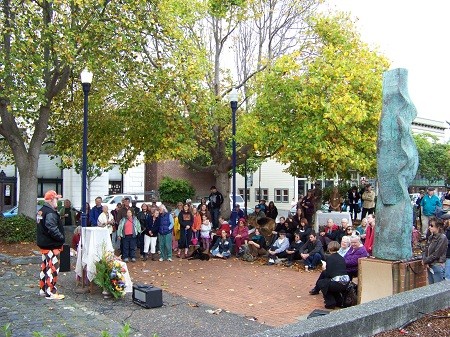 The light in John Tutuska recognized the light in so many Old Town denizens, and several dogs, over the past 20-plus years, they overflowed Clarke Street Plaza midmorning today as they gathered to bid him farewell. Tutuska, who was 67, died Oct. 14. 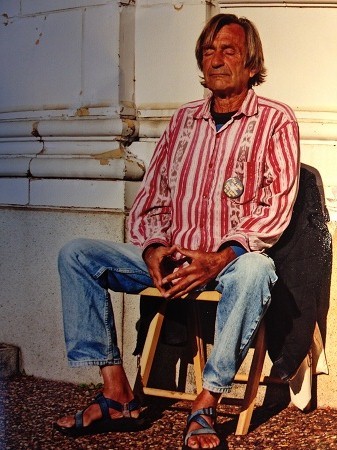 He was that sunbaked, handsome, peacefulness-spreading fellow who often could be found sitting or standing against the bright white wall of the Clarke Museum on the corner of E and Third streets. Sunlight was the best way, he said, to spark that light within. He was the man who handed out buttons saying "The Light in Me Recognizes the Light in You." His apartment was the one above the bookstore across the street from the museum that had the large, handwritten sign in the window that said, simply, "Forgive." He often was alone, but other times one or two or three people would be next to him, quietly talking or just meditating.

The table also held piles of what appeared to be Tutuska's calling card with Church of the Eternal Now. It has a photo of Tutuska on it (a photo taken by the Journal) and a number to call "for all the answers, or to contact John Tutuska." The number, alas, conjures a recording that says, "Refinance your mortgage and save" and offers a 900 number to call. (The card also suggests meditation for all of the answers or talking to John, so, that might be the better course right now.)

Many who spoke at his memorial noted how he "was a devoted student" of "A Course in Miracles," that he shared its ideas with everyone, and that he exuded a love that seemed specific to each person he met. One woman said he was especially fond of one of the course's teachings that says there is no death.

"We come from spirit and we will return to spirit," she said.

A few spoke of his more earthly life -- boxer, wonderful cook, Giants fan. But most remembered him as being, as one woman put it, "the spiritual anchor to Old Town."

An older man, pointing up through the canopy of trees into the cloudy bright sky, said "There, there is the light." Tutsuka, he said, was all around, still here.