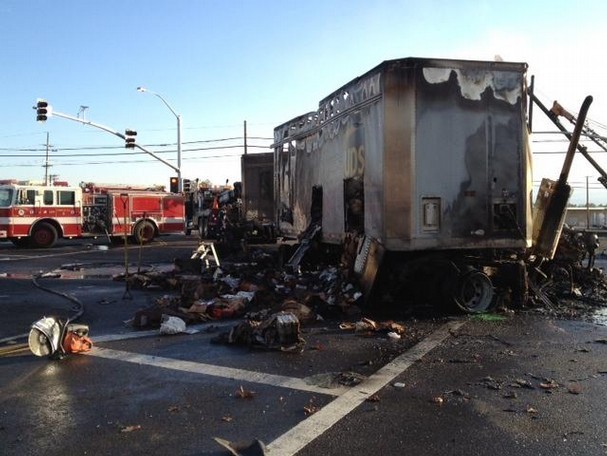 Two people were killed and a UPS truck loaded with packages bound for the coast erupted in flames early yesterday morning when a Honda sedan collided with the two-trailer big rig in Redding.

According to the Record Searchlight, the United Parcel Service truck was making a left turn across traffic from northbound State Route 273 onto Buenaventura Blvd. when a two-door Honda sedan, speeding southbound on 273, collided with the side of the truck.

Both the truck and the car immediately burst into flames, according to Redding Police Sgt. Casey Bokavich.

Redding Police officer Justin Duval helped the UPS driver, John Abraham, 57, out of the truck as his lower half was still on fire, Bokavich said. They were able to put out the flames engulfing Abraham, he said.

The driver reportedly suffered second-degree burns and was treated and released at a nearby hospital. Some of the packages in one of the two trailers were reportedly salvaged. The rest were destroyed.