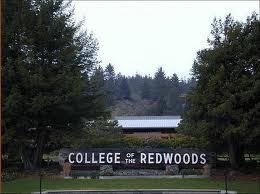 Press release from College of the Redwoods:

In a move made to address College of the Redwoods' fiscal solvency and accreditation standards, the CR Board of Trustees on Tuesday, Dec. 4 voted unanimously to eliminate 39 staff and management positions and approved a reorganization plan that also removes two senior-level administrative positions, which will be discontinued when their contracts expire at the end of June 2013.

Trustee Rick Bennett, who is elected from the Del Norte area, was absent from the meeting and did not cast a vote.

The reorganization plan and reduction in the number of CR employees will result in approximately $500,000 in savings for the 2012-13 academic year as well as permanent savings of approximately $1.6 million annually in subsequent years.

Smith recommended the staff reductions to the Trustees, stating, "This is a critical time in the history of College of the Redwoods. Our accreditation sanction of ‘Show Cause' in February, 2012, coupled with a structural fiscal imbalance, places CR in accreditation jeopardy. The institution is at risk of both losing its accreditation and moving toward fiscal insolvency. The institution must act immediately."

Smith emphasized that these staffing cuts were spread out throughout the CR District, including the Eureka main campus, as well as the Del Norte and Mendocino Coast Education Centers.

Smith said that staff reductions were extremely difficult to make and in in no way reflected dissatisfaction with an individual's performance.  "However, they will allow CR to adapt, survive, and continue to adhere to accreditation standards and eligible requirements," Smith said.

"All the services students are accustomed to receiving at CR will continue to be offered," Smith said. That includes assessment testing, help with financial aid applications and registration, advising, as well as use of computer labs and the library. CR will also implement a District-level scheduling of classes and programs to better serve students throughout the District.

Community colleges across the state have been suffering from budget cuts for the last five years.  CR's funding has declined 15 percent during that period while staffing levels and costs of providing employee benefits have steadily climbed.  CR's annual budget has been out of balance for some time and the college has been dipping into reserves to fund its commitments.

The college's financial reserves, however, have nearly run out.  CR reported only a 2.41 percent ending reserve balance as of June 30, 2012, which is less than half the state-required 5 percent.  With the current year expenditures expected to exceed current year revenue by $2 million, significant expenditure reductions are required, Smith said.

"The CR faculty, staff and management will continue to focus on its critical mission and emerge with more streamlined student services for the community," Smith said. "Our goal is to be an even better community college."

Education College of the Redwoods
Prev
Next