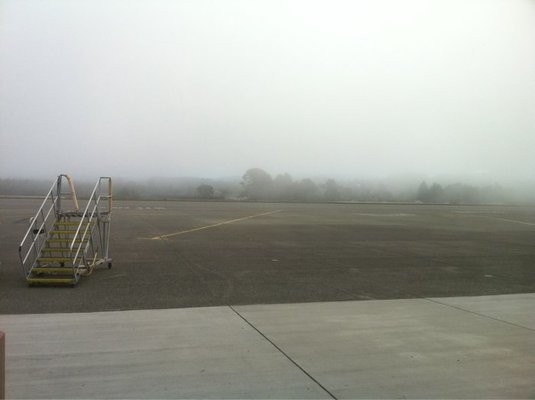 Good news for locals who travel in the sky (or whose friends/family/customers do): A group of area businesses, tribes, governments and nonprofits has cobbled together $250,000, which will be added to the $750,000 federal grant we got in September to reach the cool million dollars required to attract a new airline carrier to our foggy, remote corner of the world.

As you might recall, American Eagle, a subsidiary of American Airlines, announced a deal last spring that would have brought twice-daily service between the Arcata-Eureka Airport and LAX, but the deal fell through a few weeks later. Why? Because the county hadn't lined up funding for the $1 million revenue guarantee that American Eagle was demanding. (Such demands are now industry standard.)

The community has been understandably gun-shy about offering "revenue guarantees" to airlines since 2010, when Delta bailed on us after just 15 months of service, pocketing $500,000 in Headwaters Fund money in the process.

But in announcing this latest million-dollar carrot, which has been ponied up by the Department of Transportation, the Headwaters Fund and more than 70 local donors, Redwood Region Economic Development Director Don Ehnebuske argued that the expense should pay dividends in the long run.

For one thing, he said, ticket prices should be cheaper with competition. After Delta and Horizon skipped town, leaving Humboldt County with just one airline (United), ticket prices shot up. (Anecdotal evidence: I just searched for a round-trip ticket to San Francisco, leaving next Monday and returning Friday. Price: $556.)

Plus, Ehnebuske said, a lot of locals have simply given up on flying out of here, opting instead to drive to airports in Sacramento, San Francisco, Redding and Medford. That costs us federal aviation dollars, which are granted based on passenger numbers.

Ehnebuske and others have pointed out that Delta came very, very close to reaching its passenger-load goals back in 2010, and that was at a time when the economy was worse off and airline fuel prices were at an all-time high. The prospects for an air carrier should look better in spring 2013, which is the target date for new service to start, according to a press release from RREDC.

In a phone conversation this morning, Ehnebuske broke down some of the funding amounts by source: As reported a few months back, the federal government is providing the lion's share with a $750,000 grant. Of the remaining $250,000, the Headwaters Fund agreed to match local fundraising efforts dollar-for-dollar, meaning it will wind up contributing roughly $125,000.

The cities of Eureka and Arcata each chipped in $10,000, Ehnebuske said, while Trinidad and Ferndale threw in $1,000 apiece and Blue Lake got on the board with $100.

See more donors listed at the bottom of this press release from RREDC:

(EUREKA, CA) - The Redwood Region Economic Development Commission (RREDC) announced today that a giant step has been taken towards attracting more air service to the area -- and bringing competition back to the Arcata Eureka Airport (ACV)-- when a $1 million fundraising goal was reached today. The money will be used to support a new air carrier flying to a new hub airport until that route is self-supporting. RREDC and the County are now actively recruiting airlines and hope to have new service in place by spring 2013.

"We all recognize that air service is a crucial link to the world for Humboldt County, just like the Internet and U.S. [highway] 101," according to Don Ehnebuske, executive director of RREDC. "But like many people, we questioned why the community should raise funds to attract an airline to the area. After all, isn't it their business to provide air service? However, when we started looking into it, we came to understand the huge payback for everyone in Humboldt County."

Ticket prices shot up when Horizon ceased flights from ACV, leaving only one airline serving the area, and passengers began driving to other airports to take flights. Average one-way ticket prices to Los Angeles are now about $100 over the competitive fares of two years ago, costing the tens of thousands of passengers flying to LA millions of dollars a year. And there are about 50,000 fewer passengers flying from the airport every year, which dramatically reduces FAA construction funding available for local contractors and suppliers. The total loss to the community is at least $5 million per year by the most conservative estimates.

The $1 million raised came from the Department of Transportation, the Headwaters Fund and from over 70 local donors -- businesses, tribes, individuals and local governments. The total local contribution was $250,000. That translates to at least $40 in reduced prices and construction jobs for every $1 invested by the community over the two-year agreement with a new airline.