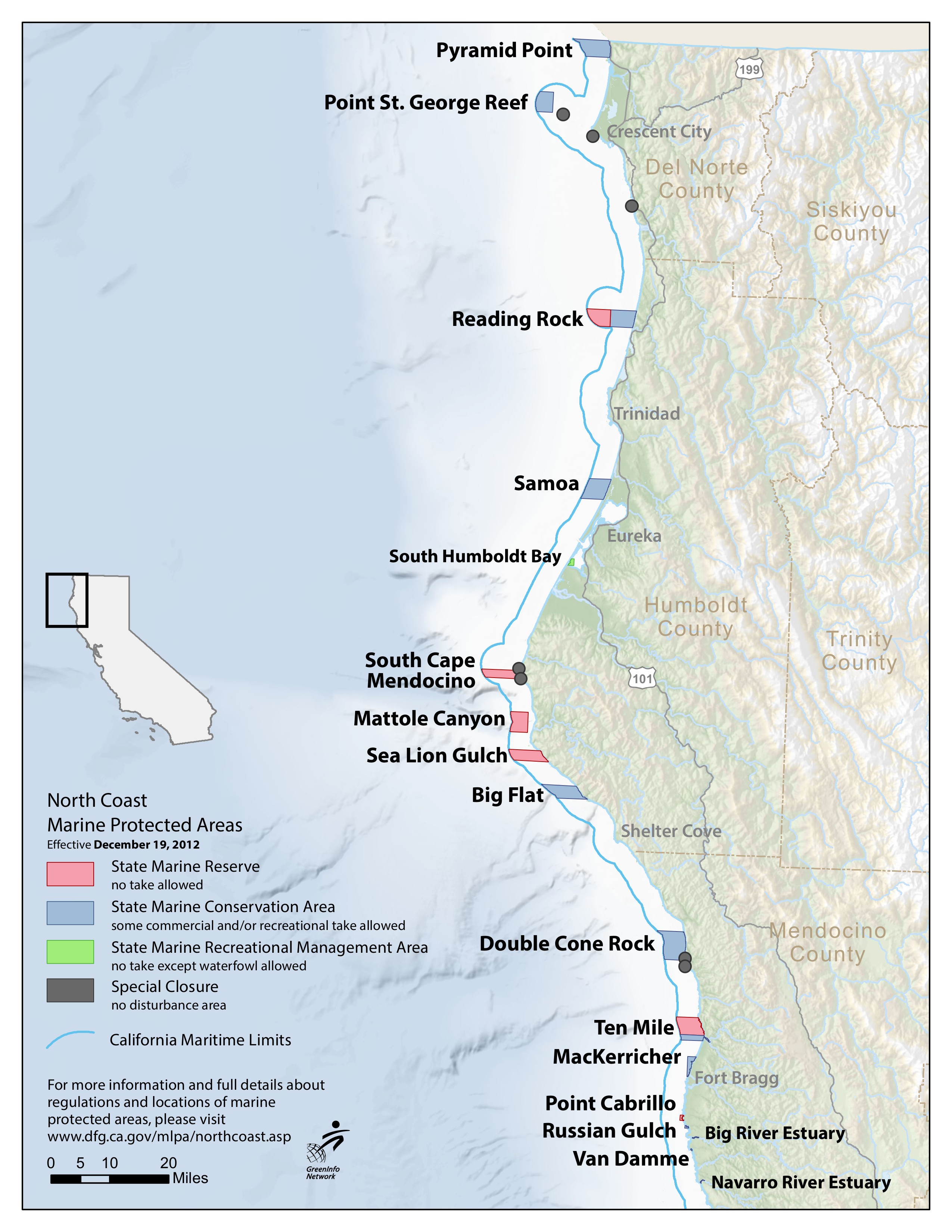 The map above (click to enlarge) shows the location and dimensions of the new marine protected areas that will go into effect next Wednesday, Dec. 19. These "underwater parks" are the result of a long and at times contentious process, though stakeholders here on the north coast managed to reach consensus on where the protected areas should be located. (No other region in the state managed that feat.)

As with state parks, the marine protected areas are designed to preserve precious and sensitive ecosystems from human disturbance.

On December 19, Californians will celebrate the grand opening of a series of underwater parks -- also called marine protected areas -- that aim to create a more sustainable future for the north coast region's coastal economy and environment. They complete a statewide network of havens that make California a national leader in ocean conservation.

"The ocean is at the heart of California's life, culture and economy," said Jennifer Savage, Ocean Conservancy's north coast program coordinator. "This milestone is important for all Californians and ocean users, as it safeguards these special coastal places and resources now and for generations to come."

The 19 underwater parks span from just south of Fort Bragg up to the Oregon border, covering approximately 137 square miles, or 13 percent of the region. They include Pyramid Point's rugged coastline; Point St. George Reef, home to the second largest nesting seabird colony south of Alaska; and waters at the mouth of waterways like Ten Mile River that are critical for salmon and steelhead populations.

The protected areas were created through the landmark Marine Life Protection Act (MLPA) of 1999. ...

"It took over a decade -- and legions of citizens putting heart and soul into the effort -- to get to this point. The result is phenomenal: a necklace of protected underwater gems encompassing our whole coastline," said Karen Garrison of the Natural Resources Defense Council. "California finally has a system of Yosemites in the sea."

The network protects an average of nearly 16 percent of California waters, an impressive accomplishment considering that only 1.6 percent of the world's oceans are afforded similar protections.

In the north coast, local fishermen, divers, tribes, business owners and conservationists put aside their differences and came together to design the marine protected areas and promote sustainable uses, from fishing and gathering to diving and kayaking. Traditional non-commercial tribal uses will continue with no additional restrictions in the 13 State Marine Conservation Areas, in which limited recreational and commercial fishing will also be allowed.

"We thank the Creator, and are very pleased that North Coast residents stood in solidarity with the tribes," said Priscilla Hunter, chairwoman of the InterTribal Sinkyone Wilderness Council. "With the new protections and our people's careful continued stewardship, future generations will be able to live our tribal traditions and enjoy the ocean's gifts."

The Sinkyone Council is a consortium of 10 federally recognized tribes based in Mendocino and Lake Counties that retain cultural and ancestral connections to the coast and marine waters of Mendocino and southern Humboldt. Along with more than 20 tribes, the Council was actively involved in the North Coast's MLPA process.

Many of the 19 new protected areas are located adjacent to public beaches and state parks, creating great opportunities for education, research, and recreation. They allow a wide range of recreational uses such as swimming, surfing, kayaking and wildlife viewing but are protected from some or all harvest of ocean life to allow ecosystems to thrive.

Scientific studies show that well designed marine protected areas have a greater diversity of species, making them more resilient, and more and bigger fish and other sea creatures, relative to fished areas in similar habitat. Because big fish have more and healthier young, these areas can be engines of productivity.