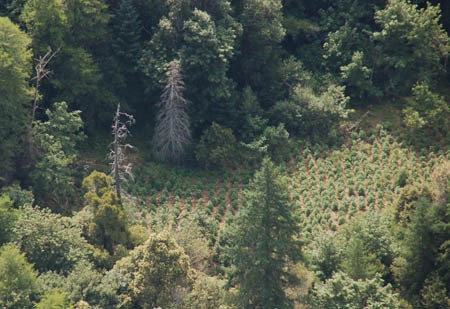 The Hoopa Valley Tribe is forming a national guard, of sorts, to protect the land and tribal members from the human dangers that lurk in its woods, the Two Rivers Tribune reports. The new Hoopa Tribal Citizen Corps arose in response to "months of incidents caused by non-tribal members trespassing on tribal lands."

The Tribune story offers many examples of these scary run-ins, including this one:

On the evening of October 14 and early morning of October 15, four young men from Hoopa were on an outing in the woods eight or nine miles up Mill Creek Road when they stumbled across an illegal white plastic irrigation line that stretched as far as they could see.

Within minutes they were being hunted through the woods with gunshots ringing in the air. The ordeal lasted more than four hours.

They were eventually rescued after they texted a friend, who relayed the messages to Hoopa Tribal Police.