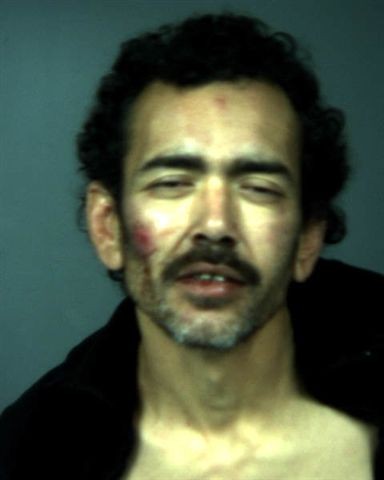 On 12-23-2012, approximately 6:00 p.m., the Humboldt County Sheriff's Office was notified of a man on top of the Shop Smart Grocery Store, 3430 Redwood Drive, in Redway. The caller said the man was pouring gasoline on himself and was attempting to light himself on fire. Deputies, California Highway Patrol Officers and fire personnel responded to the scene.

When deputies arrived on scene, they saw a crowd had formed in the parking lot. The suspect identified as Ricardo Guerra, 43 years old from Whitethorn, was standing on the roof with his two dogs. Guerra was holding a one gallon plastic jug filled with gasoline and was pouring over his body.

Deputies made verbal contact with Guerra attempted to talk him down from the roof. When deputies spoke with Guerra he held up a lighter and then began pouring gasoline down the west wall of the store while screaming he was going to burn the building down. He then picked up a concrete cinderblock and rocks which he threw from the roof towards the crowd below. He then began pacing back and forth across the roof edge.

Deputies and CHP Officers then accessed the roof using the fire departments ladder while fire personnel stood by with a hose in case Guerra lit himself, the law enforcement officers and the building on fire.

Once the law enforcement officers accessed the roof, Guerra ran at the officers with a jug filled with gasoline and threw gasoline on one of the deputies striking him in the chest and face, before running away from the deputy. Guerra then hung off the roof which was thirty feet above the ground below. The deputy and a CHP Officer grabbed Guerra and brought him back onto the roof. While they were doing this Guerra attempted to ignite a lighter he was holding against the deputy while screaming, "Die, die, die" and trying to ignite the deputy he threw gasoline on previously on fire. Once on the roof Guerra attempted to fight with the deputy and two CHP officers who were able to overpower him.

After Guerra was restrained, he was brought to an awaiting ambulance with the assistance of the fire personnel on scene. He was transported to a local hospital. After he was medically cleared he was transported to the Humboldt County Correctional Facility where he was booked for felony battery on emergency personnel, attempted arson, obstructing and resisting law enforcement by use of force and violence and being under the influence of a controlled substance. His bail is set at $50,000.00.