In Saturday's chilly, pre-dawn hours, supporters of the over 80-year-old Loleta Meat Market gathered, hung signs and set up a table full of donuts for what was scheduled to be a weekend-long protest. But to be clear, the sprinkled pastries they provided were not made by neighboring Loleta Bakery.

The mostly Facebook-organized protest was aimed at the owners of Loleta Bakery, Peter and Jeanie van der Zee, who late last week gave the meat market owners a 60-day notice to vacate (the van der Zees own the building). The issue? They need the space. The very successful four year old bakery would like to expand customer seating and production into the current meat market location, a decision which has divided the town.

"They don't even act like part of this community," said protester and former bakery employee Elaine Jones who worked at the bakery from its opening day until just over a year ago.

While the protesters waved signs and discussed grievances out front, Loleta Meat Market owner Pixie Setterlund sliced steaks as part of her regular day-to-day preparations in her shop's back room -- a space that shares an open door with the bakery's back room.

"We're only the second family that's ever owned this place," said Setturland, who has worked at the shop for 26 years and and owned it for 14. She hopes that the town's furor will help illustrate how important her work is to the community she feeds.

On the other side of the wall, bakery owner Peter van der Zee says the decision to evict Setturland was "heart wrenching." He looked at all the options, considering moving to another location, but in the end if his business was to remain financially viable he had to expand.

"I have the utmost respect for Pixie. She's good people. What she does with sausage -- she's an artist," he said. "But if I don't do this Loleta Bakery won't be here next year."

Van der Zee says he's discussed other options with Setturland, like moving her operation down the street to the old Gilded Rose building which he also owns. Setturland says that won't work and, in fact, why doesn't the bakery move then.

"He doesn't understand that I can't pick up my walk in cooler. You can do that with your coffee maker, your panini maker," she said. "We're wired in 80 years."

In the event that she is forced to close her doors, Setturland says she'll likely join her brother at the Ferndale Meat Co. -- the siblings own both businesses jointly.

The protesters ranks swelled to over 50, as the day wore on. Some yelled "please do not support the bakery" at potential customers. Some chanted "Save The Bacon!"

"This stuff is the best," the grillmaster remarked (full disclosure: I ate some.) "And it's local."

Soon he'll likely have to drive a bit farther to get it.

The hardcore meat lovers kicked things off at 7 a.m. 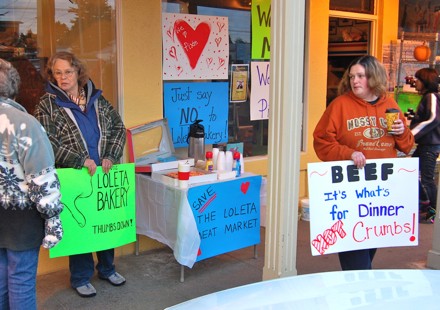 HCSO on the scene.

UPDATE 1/14: We're inching our way toward good news, sausage fans. After Saturday's community outpouring, the meat and bread camps decided to schedule another meeting to see if they could come to some sort of compromise. Thus, on Sunday the owners of both Loleta businesses walked down to the old Gilded Rose building and discussed the logistics of a potential Loleta Meat Market move.

"I felt that it was a remarkably positive, congenial meeting," said Loleta Bakery co-owner Jeanne van der Zee, who said the meeting was not a result of the weekend protest. She'd have liked to have it earlier, but emotions were running high. According to van der Zee, she and her husband Peter have offered "financial and neighborly support" and have extended their initial 60-day eviction notice though she declined to say for how long.

There's still a lot to be hammered out if anything is going to happen. Meat market owner Pixie Setturland's daughter Jenny Aubrey said a move down the street would still be something of a financial stretch for her mom but said they may again reach out to the community for fundraising help. But, for the moment, the future of sausage in the Eel River Valley is a bit more hopeful than it was.