Who Broke and Entered and Burglarized the TV Station? 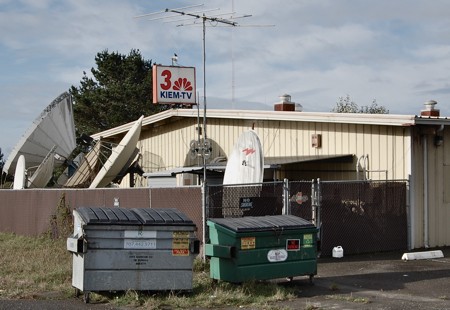 The station may call itself "News Channel 3," but I suspect they'd rather not be the news. A trailer behind the staion's Humboldt Hill HQ was allegedly broken into over the weekend, with the thief making off with roughly $10,000 worth of equipment, including four news cameras.

On 01-27-2013, approximately 12:00 noon the Humboldt County Sheriff's Office received a call from the station manager of KIEM News reporting a burglary to the station. A deputy responded to 5650 South Broadway Avenue, Eureka and met with the station manager who reported that someone stole four news video cameras and a scanner from a single-wide trailer located behind the building. There were no signs of forced entry.

The news station and the Humboldt County Sheriff's office is requesting the public be on the lookout for the three stolen Sony cameras and a Panasonic camera, along with a radio shack scanner. Estimated loss is $10,000.