The Caspar Inn: A Eulogy

Sad news made the Facebook rounds yesterday: The beloved Caspar Inn will be closing its doors at the end of the month. Music/booze lover, frequent patron and NCJ contributor Jennifer Savage offers the following obituary. -AG

For decades, the Caspar Inn delivered everything an old roadhouse should: rockin’ bands, good whiskey, better-than-decent food and bartenders you didn’t want to cross. If you booked a room there, you were advised the following: “Rooms are above the club, music can be heard in the rooms and the noise may not quiet down until well after 2 a.m.” Also, to the consternation of some who failed to do their homework, no TVs -- but what kind of fool needs a TV when the music’s banging and the party’s going all night long? Plus the noise offers some camouflage for those getting their own party on in their own room -- point being, from live music to bar chatter to bumping uglies, guests at the Caspar have all kinds of more intimate options than staring at a screen.

I’ve stayed at the Caspar a few times, prompted by the booking of some particularly fine band. The last time I stopped in, the night’s line-up was midget wrestling. I skipped the show, but had time to indulge in some Maker’s and a meal at the bar. A lonely gentleman struck up conversation. The food was fabulous. The ambiance was loud. The whiskey hit the spot. The mix of locals and travelers made for amusing eavesdropping -- small town means a lot of dating your friends’ exes, apparently, and the middle-aged couple who asked, “Do people really grow marijuana around here?” inspired chuckles. But the Caspar was mostly about the music and the dancing and providing a solid night, all night, out.

Unfortunately, those days are about to end. A post on the Caspar Inn’s Facebook page revealed, “So yes, the rumors are true. The Caspar Inn will be closing sometime in the near future. We don't have a specific date yet but we'll let you know….” Sad news from a business that’s held in there since opening in 1906. Sure, the drive to Mendo includes a hellacious 22 miles of hairpin curves, but making the trip to see local favorites The Blushin’ Roulettes or touring funtimers Yogoman Burning Band was always, always worth it. In an area with little to do at night, owner Bobby Miller managed to keep the good times -- and good music -- going. A lot of Mendo locals have mentioned how much they’ll miss it. A lot of us up north will, too. 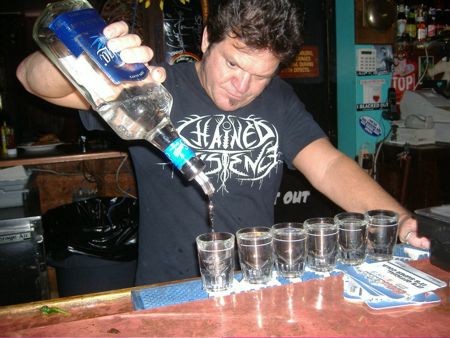