Guns in a Cave 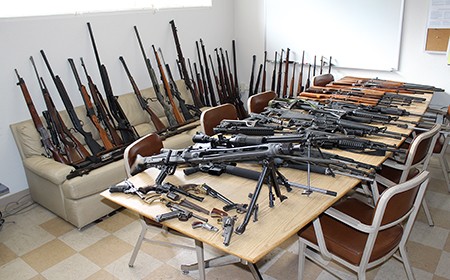 The gun cache found in a cave on Ryan Floyd's property in southern Humboldt was impressive and frightening. One hundred and eleven rifles and pistols, many of them automatics, more than filled a table in a room in the Humboldt County Courthouse, with overflow piled on a couch and leaning against three walls.

"Quite a haul of weapons," as Sheriff Mike Downey put it.

The cache was found on a 55-acre piece of property belonging to Floyd, who was apprehended following a high-speed chase. Sheriff Mike Downey offered an abridged recap: "Mr. Floyd was seen. He sped away from deputies. We found that the vehicle he was in was stolen. There were a number of issues that led us to search the property. It's a long, convoluted story."

They also found jewelry that had been reported stolen by a neighbor, a brand new UTV Kabota Tractor, also reported stolen, a stolen trailer, a concrete cutter, an air compressor, chainsaws and more than 40 vehicles. The empty gun cases led officers to believe there was a stash somewhere on the property; an extensive search brought them to the bunker. 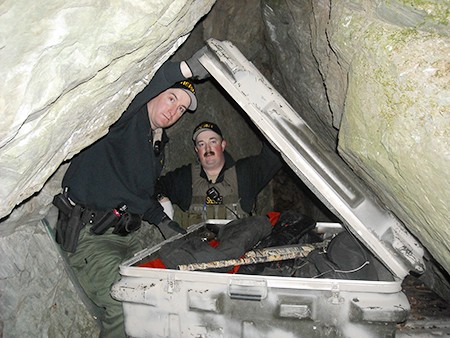 "By the looks of the weapons, they appear to be in good shape, there's no rust on any of them," said Downey. "We've run the serial numbers and we've have 20 hits of possible stolen weapons. We're in the process of verifying who they may belong to, ownership, that sort of thing."

Downey said the Floyd family has owned the property for years. "When I was the sergeant in Garberville, I personally served search warrants on the same piece of property. The people that control the property have a long history of bringing vehicles in, running some sort of chop shop, parting things out. I know 15 years ago there were a lot of cars, generators and ATVs strewn about. It hasn't changed much."

Downey noted that he'd arrested Ryan Floyd's father, who ended up serving some time for his crimes, "but not much."

The sheriff described the property on Flint Rock Road east of Garberville as "very rural." He said the road got its name because "there's a rock on the property where Native Americans used to make arrowheads."

"Why would someone have so many weapons?" wondered a TV newsperson.

"I can't think of any reason to have this many weapons but to sell them, unless you're arming a small militia, said Downey. He figures the value of the cache could be as much as $100,000.

"Some are collector's items; some are banned weapons that would garner a higher price from someone trying to get a hold of an illegal weapon," he said, pointing out a fully automatic belt-fed machine gun. "Based upon Mr. Floyd's criminal history, he's probably not able to possess any of these weapons, so they would be confiscated," he added.

What will the Sheriff do with the confiscated guns? As noted, some of the automatic weapons are clearly illegal under California law. "Many times they're destroyed," said Downey. "If they're legal, we sometimes trade the weapons for other equipment. Sometimes if it's a weapon we need in our own armory we'll retain those."

"We're just glad to have these weapons off the street," said Deputy Steve Knight. "They easily could have gone into someone's hands to be used against us or someone else."

The investigation into Floyd's activities and the history of the weapons is ongoing. If you've had a weapon stolen, it could be part of this cache. 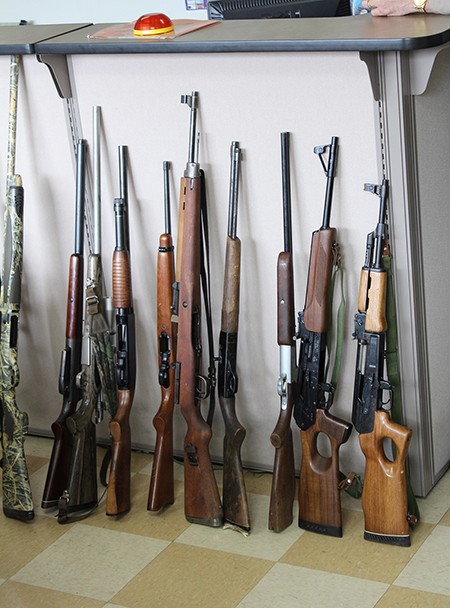 On 1-12-2013, approximately 9 a.m. Humboldt County Sheriff's Deputies and California Highway Patrol Officers returned to 500 Flint Rock Road, Garberville. Deputies obtained a Humboldt County Superior Court search warrant for the residence and property after receiving new information from citizens about possible additional stolen property in the residence and on the property.

When the deputies arrived they located Deanna McDonald, 33 years old and her two small children at the residence. Deputies searched McDonalds vehicle parked at the residence and found a loaded .45 caliber semi-automatic handgun. McDonald was issued a notice to appear for possession of a loaded weapon by a prohibited person and released at the scene to care for her two small children, one of which was an infant.

Deputies searched the residence and located stolen jewelry that had been reported stolen in a residential burglary of a nearby residence. Deputies also located a stolen new UTV Kabota Tractor on the property along with a stolen concrete cutter, air compressor and what is believed to be numerous stolen chainsaws. Many of these items were reported stolen from local residences in the Eel River Valley, Dyerville and Highway 36 areas.

Deputies continued the search for a cache of firearms they believed was stashed somewhere on the property. This was based on the numerous empty gun cases they found during earlier searches. During the search of the 55-acre property an alert deputy located a cave in some rocks that was covered with brush. Upon further investigation the deputy discovered the cave was filled with numerous firearms.

Deputies are continuing to try to determine what is and what is not reported as stolen property. Citizens that are missing property, especially firearms, who live in the area of Flint Rock may E-mail Sheriff's Property technician Ryan Chamberlain at Rchamberlain@co.humboldt.ca.us.

This is an ongoing investigation. Additional charges against Ryan Floyd will be sought.

Previous coverage of Floyd's exploits can be found at the LoCO and the T-S.