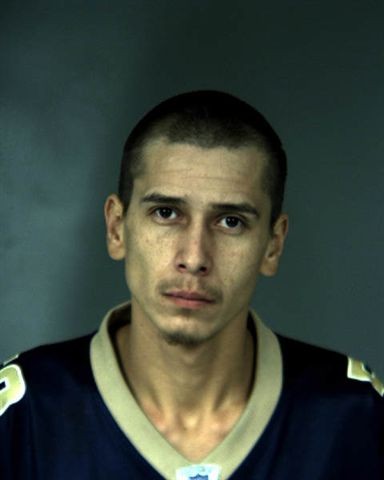 The person of interest in the investigation of a hit-and-run that killed a young Orleans man earlier this month came within inches of turning himself in today up at the Salmon River Outpost in Somes Bar.

Sean Forrest Hawk, 27, of Orleans, has been a fugitive since Feb. 10 when a Ford pickup he's alleged to have been driving plowed into Virgil Martin, also of Orleans, who was walking along State Route 96. Martin, 25, was killed. According to the California Highway Patrol, the driver of the pickup -- identified by witnesses as Hawk -- fled the scene. Later that day, a CHP helicopter located the pickup several miles from the scene. Hawk has been hiding ever since, and the CHP issued a warning that he might have a .22 caliber rifle on him and is potentially dangerous.

That didn't stop Earl Crosby, who works for the Karuk Tribe, from approaching Hawk this afternoon when he saw him near Reynolds Creek about three miles north of Somes Bar (which is about seven miles from Orleans).

Crosby said he was heading back to his office in Happy Camp when he saw Hawk walking along the road. So he called the California Highway Patrol to report it. And then he drove back up the road to talk to Hawk. "I said to him, 'It'd be a good idea to turn yourself in,'" Crosby said. "'The cops are looking for you and you better do something.' And he said, 'Yeah, I better do something.' 'Well,' I said, 'jump in my truck and I'll bring you to the store and you can turn yourself in.'"

Hawk said OK and jumped in his truck, Crosby said, and they drove to the Salmon River Outpost. When they got there, Crosby said, Hawk got out, said "thanks," and started walking back upriver.

"I said, 'Hey, Bud, do what you said, turn yourself in,'" Crosby said. He said Hawk shouted back that he was going to.

Crosby said Hawk looked "as tweaked as he normally is."

"I feel bad that he didn't turn himself in," Crosby said, "but it would have been silly to try to restrain him. There's a good chance he has a gun. Hopefully he will turn himself in before he gets hurt or somebody else gets hurt -- and so the family of Virgil Martin can have closure. This is a golden opportunity to turn himself in, get in out of the rain."

When we spoke to Crosby around 5 p.m., he and the other folks at the store were still waiting for the CHP to arrive.