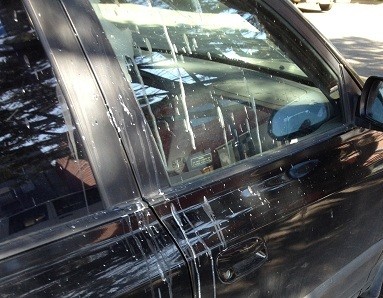 This was nothing new. All the cars parked under the row of big Leyland cypresses that divide the parking lot at First and D streets were kersplatted in white drips and blops. And the pavement all around these bombed cars was, as usual, devastated. Whitewashed.

Just like every day before this. Oh, maybe it was a different set of cars parked there each day -- each unsuspecting driver amazed she'd found such a spendid spot so close to her office or the Old Town shops and restaurants. Score! (Pllllop.) A few cars always looked familiar, though, as if they'd been there before and often -- look at all the crap on them, plopped on day after day and the driver not caring about the slow-motion and, um, shitty paintjob. Maybe perversely inviting it. Anything to cover that aging Kia fade.

But every day, a fresh new splatter-bomb of bird poop.

Ravens? They were always chortling and laughing around there, acting proud and guilty. Gulls? You can always blame the gulls. But wait -- who's that, shifting about fitfully and fatly on that limb up there, grumbling like a dinosaur? And there's another one, and another. Another!

A man walked by, swinging a little wide of the potentially annoying woman staring up in the trees. "Herons," she said to him. "Herons?" he said, nicely. Then added, "I wonder if that's why the city doesn't seem to cut these trees like they do all the others in town."

Smart feller. He's right, turns out (and forgive me if you Old Town oldtimers already know all this). Tom Coyle, the City of Eureka's parks and maintenance manager, said night herons -- much smaller than their blue heron cousins -- have roosted in those cypress for at least 10 years. Sometimes there've been a near-dozen of them; lately there are fewer. And yes, the city prune crew -- Coyle's folks -- give the herons' trees (these ones, and a Monterey cypress by the Adorni Center) easy treatment so as not to disturb them. It's an arrangement they worked out with the state fish and wildlife folks some years back.

"Heron nesting and roosting habitat is protected around the bay," Coyle said. "The only pruning we do on those cypress is we prune them for clearance around the parking lot lights. And then we'll prune them up a little bit for pedestrian clearance."

Such head-bonk-proofing will not, necessarily, protect a person from a well-aimed heron offering. 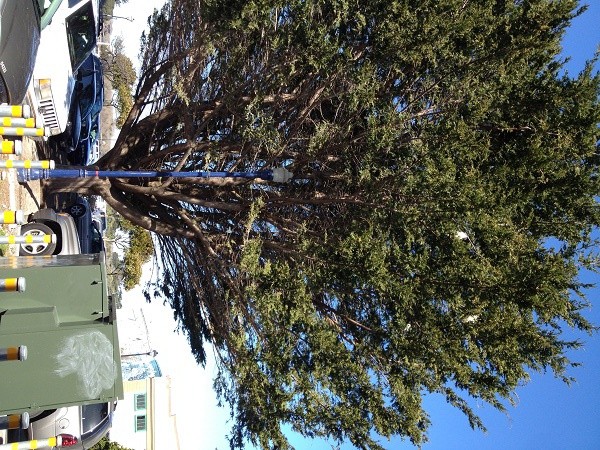