This is the time-- the best time -- to sneak up on the sleeping L.a. and ATTACK. Bash! Bash! Buuu-ash! Before she busts out into those bright, sunny yellow plumes of intoxicatingly sweet blossoms that quickly turn to seeds that scatter in the sand and get scurried away by critters who drop some and bury some and lose some, helping spread the yellow plant far and wide. 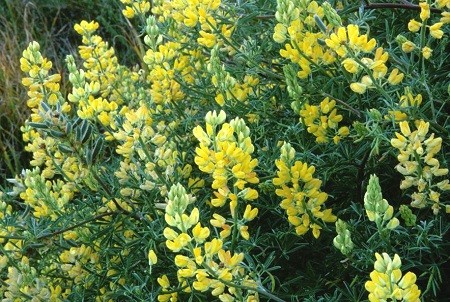 What? Why? What did she ever do to you?

The non-native yellow bush lupine -- introduced to our area by an apparently sentimental fog signal station keeper in 1908 -- edges out native dune mat plants, adds a bunch of nitrogen to the soil and makes it a better place for other non-natives -- and coyote bus, a native plant that normally wouldn't get on so well there, which ends up dominating over time. Short story: Yellow bush lupine and her following ilk end up stabilizing a dune, and it stops being that shifting, dynamic place where wild strawberry, beach layia, seaside daisy and other native plant folk roam. Some people don't think that's right. This is all according to the U.S. Fish and Wildlife Service's Humboldt Bay National Wildlife Refuge web page on the yellow bush lupine.

And that's why, every year at this time, Friends of the Dunes gathers a volunteer army and marches out into Lanphere Dunes -- part of the wildlife refuge -- to bash the lupine. In fact, tomorrow -- Saturday, Feb. 23 -- is the group's 35th Annual Lupine Bash.

Wait -- they've been doing this for 35 years out there?! Shouldn't that bush have retreated by now?

Actually, says Carol Vander Meer, Friends of the Dunes' executive director, the lupine and other dune-altering intruders have been beat back in many sections of Lanphere. But Lanphere keeps growing as the Fish and Wildlife Service adds acreage to the protected unit. Saturday's bashers will be working in one such new area.

Even more to the point: It takes a very long time to get rid of the huge seed bank deposited by yellow bush lupine and its critter helpers.

"Usually you work in an area for 10 years, about, because of the seed bank that's there," said Emily Walter, with Friends of the Dunes.

Feel like kicking some lupine hiney? Go here for instructions.