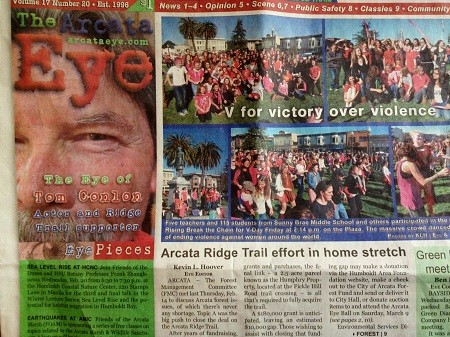 As fans of the Arcata Eye know -- and that's gotta include just about most of the sentient newspaper-browsing world -- its hardworking, break-not-taking, fearsome and fearless founder/leader, Kevin L. Hoover, is goddammit calling it quits next year. He announced his plans to get a life -- or more from life, or a vacation, anyway -- a whole two years in advance, and the one-year-more mark is upon us, as Hoover notes this week in his column, "So-Called Thoughts":

"With this edition, we begin the Grand Countdown to Doom, or not. Unless someone else acquires it, the Eye will end publication Feb. 12, 2014, so you are holding the first issue of the Eye's last year in existence."

Or, not ... as Hoover says. He alludes to offers he's had from various "suitors" with optimism, while lamenting that none of them have "offered serious compensation" for the paper he's labored at for 17 years, a creation that's recognized far beyond the blurry treeline of Arcata and even Humboldt County. "Possibly," he notes, such compensation "could come in the form of a job with the Eye, under new ownership."

Argh, we can't stand this anymore -- we'll just blurt it: According to an email obtained by the Journal that Humboldt State University President Rollin Richmond sent out earlier this month to Hoover and a dozen-and-a-half university staff and faculty, HSU is one of Hoovers' suitors!

The email's intent is to set up an April meeting, Richmond writes, "to discuss the possibility of the university or one of our auxiliaries taking over the ownership and management of the Arcata Eye." He continues:

"Kevin Hoover is planning to retire in 2014 and in preliminary discussions has indicated that he would consider giving the paper to the university and perhaps even continuing as a staff member. I am particularly interested in a university-Eye association of some sort because I think it is important that the community have a good, independent, local source of journalism as the Eye has been providing, and that it could provide some important opportunities for our students and faculty and staff.

"I would like to explore this opportunity with faculty from Art, Communication, Business and Journalism and well as IT staff. ..."

It's an intriguing bailout option, without which -- and if the other courtships don't take -- the saddest scenario possible is the end of the Eye. Lights out. Put an X on it.

But, a couple questions. How would a newspaper be "independent," able to cover all of the news fairly, if it's owned by one of the largest employers in the county and frequent news generator? And, what about the newspaper the university already shepherds -- or makes a home for -- the student-run The Lumberjack?

Hoover, reached by phone this afternoon, deferred "how-would-it-be-run" and Lumberjack-related questions to the university folks. We left messages with Richmond, who's in meetings all afternoon, and we will report back when we hear from him.

Hoover made one thing very clear, however: He would only hand over the Eye to "a responsible person who isn't going to turn it into a political or one-note rag, but who would attempt traditional community journalism."

"Whoever was to run the paper would have to have a deep comprehension of the fact that we're here to serve the readers," he said. "I'm looking for credible people to take over the paper, whom I would have confidence in sustaining it and probably -- hopefully -- improving it. Fresh blood, fresh talent, fresh energy. Because I don't think we're fully exploiting the paper's potential at this point, or fully serving the community."

He also likes the idea of having a job with the paper -- a regular, journalist job, absent the business-management side of the operation.

"It would be lovely to have some kind of position with the paper where I could play to my strengths rather than my mediocrities," he said. "There are stories around here that I've known about for 15 years -- things I'd like to look into, but I haven't had time."

Hoover didn't seem concerned about a Lumberjack conflict -- it's a student learning tool, in large part, and a fine one, he added. The Eye is a community newspaper, its DNA, as Hoover puts it, reaching back to the 1850s to the town's first newspaper, the Humboldt Times. (For a glimpse into the county's rolicking newspaper past, check out this timeline put together by the HSU library.) And, he added, the more newspapers the better.

Hoover wrote in his column about a month ago why Arcata needs a scrappy community newspaper:

If history is any indication, sooner or later, something will come up that only a homegrown, in-town newspaper can properly report on. A drug felon might try to take over a Plaza bar. There might be dysfunction in City Hall. Someone will dump toxic waste in a stream, the Bottoms or elsewhere. A big, bad development might be proposed right over your backyard fence. Dilettantes, grifters and charlatans might run for public office. A trusted mucky-muck will do something extremely stupid or dishonest. Scammers will find a new way to rip you off. Politicampers will take over a City park, the Plaza, part of the forest or City Hall’s front lawn. A meth/grow/trash/party/abandoned/motorcycle/car repair house might bring down your neighborhood. Maybe dogs are getting sick on your block. Or maybe your child just won a prize and you have a cute photo you want published.

Actually, all that stuff has happened, some of it during the past year or two. You would have found out about some of those stories without this newspaper; some of it not. Unless history has ended, things like that will crop up again, and soon.

President Richmond plans to arrange a meeting with Kevin and campus colleagues to see if there is some way we might help. One thought is whether faculty and student interns could provide useful technical input or research and analysis in such areas as the Eye's marketing or more advanced digitization. Over the years, we've worked with scores of community partners and small enterprises in this way. Maybe we could provide info-tech expertise. We'll see whether concrete ideas and proposals come out of our informal brainstorming.

In a follow-up email, Mann referred to a piece he wrote for the Times-Standard about ways in which students have helped local businesses, including Los Bagels and Babe's Pizza, with market research. To the question of how a university-owned newspaper would be able to cover news about the university objectively, he responded, "'University-owned' is a leap and 100 percent premature."