Not All About The Shark 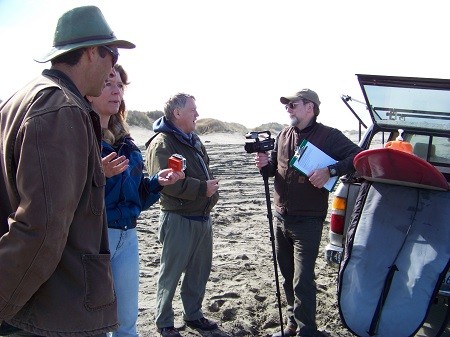 Not far from the Bunker Road parking lot, north of the North Jetty, surfer Bill Lydgate had parked his truck on the waveslope. His surfboard jutted out of the back end of the camper, and he was scrubbing wax off its front end.

Jennifer Bell, meanwhile, was putting together a tiny camera with a bright orange float-block stuck to it. Michael McClymons and Ted Okell, nearby, readied their own camera equipment and discussed the operation. They tried attaching the tiny orange camera to the now-clean spot on the surfboard -- excellent; it would catch the speeding water beneath the board, Lydgate's feet, action. 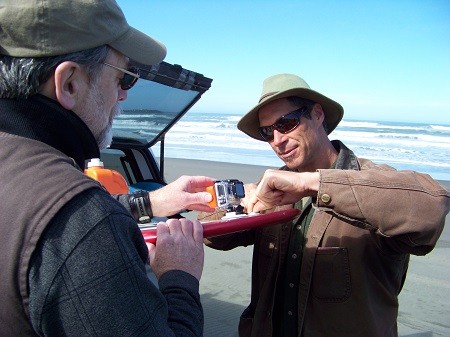 It was the sort of footage the film crew -- friends from the digital media program at College of the Redwoods -- needed to complete their documentary about surfer Scott Stephens, the great white shark that attacked him near this spot last October, and the people in the water at the time of the attack, and on the beach, who rescued him.

They saved Stephen's life, according to the surgeon who pulled Stephen' flesh back together in the emergency room.

In fact, the documentary has become very much about Stephens' rescuers, who acted so quickly and fearlessly, McClymons and Bell said. (A fourth member of the shoot, Robert Stoneman, was home sick today). Originally, the crew had come together because Stephens needed someone to help him film raw footage of him recounting the attack to give to the extreme-sport website Buddhasport.com, which had asked for it. First they filmed an interview of Stephens at Lost Coast Brewery (where his shark-bit surfboard hangs on a wall). Then they started interviewing the people who rescued him.

"And we realized, they're the real story," said McClymons.

The crew isn't ignoring the attack itself. For that part of the film, Okell, an artist, has drawn sketches of the attack as Stephens describes it: He's just ridden another wave, it's a fantastic day, and he's paddling out for more. A shark grabs him. It pulls him under. It shakes him. He punches it in the nose. It lets go and, bleeding but staying calm, he swims to shore. Stephens' voice will narrate over the sketched scenes, edited together into a vignette by McClymons.

The film then recounts, through interviews, the derring-do of the folks who tried to swim toward him through shark (and blood-tainted) water, the ones on the beach who laid on him to stop his bleeding, flagged down a pickup on the beach which hustled him to town, its driver calling an ambulance to meet him there, and the emergency room crew who attended him.

Lydgate, who was at Bunkers that day but far enough away he missed all the action, and Okell got in the truck and drove a bit closer to the jetty. The swell seemed better there. McClymons and Bell, on foot, met up with them. Lydgate stripped off his clothes and pulled on his wetsuit, then he and Okell attached the little camera -- donated to the crew by GoPro -- to the surfboard so its eye could record surfboard, feet and rushing water as Lydgate surfed.

Then, while Okell filmed, Lydgate walked into the waves. 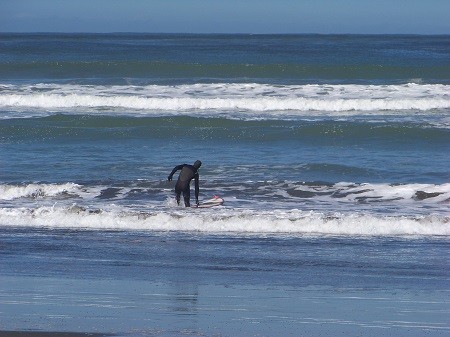