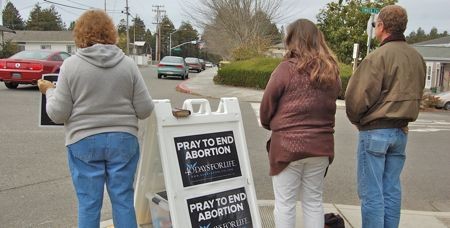 The Eureka arm of the 40 Days For Life campaign, the human prayer shield camped out in front of Six Rivers Planned Parenthood since Feb. 13, wrapped up operations over the weekend on Sunday, March 24. Done.

So what did we learn? Be careful what you sign up for. Early on in the saga, the Journal signed up for the 40 Days of Life daily newsletters. Then, for 40 straight days we received emails sent out by campaign director Shawn Carney through its headquarters in Fredericksburg, Va. Most of the daily blasts chronicled movement successes and inspirational anecdotes culled from reports from the many encampments around the world -- the final number of babies saved they're goin' with is 554, by the way.

But finally, on Day 38, Eureka got its moment in the spotlight. In an email titled "They're back!" 40 Days of Life warned its followers about efforts to undermine the campaign's message and highlighted Clergy for Choice and Six Rivers Planned Parenthood as "the worst of the lot." Their crime? Mocking God.

The aforementioned section of the email follows:

Lots of people love the peaceful approach of 40 Days for Life and see how God has used this effort.

BUT ... it comes as no surprise to find out that not everybody is a fan.

There are people in the abortion industry who call this campaign "40 Days of Harassment." No one is being harassed, of course (except maybe the prayer volunteers).   The truth is that peaceful prayer on the sidewalk is bad for business. So the pro-abortion side is doing whatever it can to minimize the impact ... by twisting the truth.

There are a number of pro-abortion backlash efforts that have adopted the "40 days" theme. The worst of the lot is jointly sponsored by "Clergy for Choice" and the Planned Parenthood affiliate in Eureka, California.

This effort, "40 Days of Prayer to Keep Abortion Safe and Legal," is really a mockery of 40 Days for Life -- and frankly, of God. They use a collection of 40 daily prayer intentions -- sounds familiar, doesn't it?

But listen to some of the "Clergy for Choice" intentions:

• Day 5: Today we pray for medical students who want to include abortion care in their practice.

• Day 18: Today we pray for all the staff at abortion clinics around the nation. May they be daily confirmed in the sacred care that they offer women.

• Day 27: Today we give thanks for abortion providers around the nation whose concern for women is the driving force in their lives.

• Day 40: Today we give thanks and celebrate that abortion is still safe and legal.
To respond to each of those "prayer" intentions:

• Day 5: Fewer and fewer medical students are interested in abortion. Aging abortionists are retiring and not being replaced.

• Day 27: The "driving force" for Planned Parenthood is money. There is no prestige in the abortion trade.

• Day 40: Safe and legal? Based on numerous ambulance calls at abortion facilities, "safe" couldn't be any farther from the truth. And of course, abortion is never "safe" for the baby.

Let's all pray for all of those who've convinced themselves that abortion is a moral "choice" -- and for all who are deluded into believing that lie.

As we previously reported, in response to the 40 Days For Life campaign, Six Rivers Planned Parenthood launched a Pledge-A-Picketeer campaign. In the end it raised over $15,000 for the clinic.