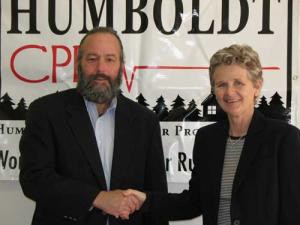 Next Monday, two county supervisors will call into question the 12 principles that have been guiding the county’s general plan update since March 2004. In an email to Planning Director Kevin Hamblin sent yesterday evening, 2nd District Supervisor Estelle Fennell offered a draft of 11 rewritten guiding principles. She explained that she’s “been hearing from several people” about the existing principles and that both she and 1st District Supervisor Rex Bohn would like to see her alternative versions discussed.

How do Fennell’s guiding principles differ from the existing ones? They put a stronger emphasis on property rights and rural development and deemphasize environmental protections.

This shouldn’t come as a surprise given Fennell’s almost three-year tenure as executive director of private property rights group Humboldt Coalition for Property Rights (HumCPR) and her recent votes to appoint that group’s leaders, Lee Ulansey and Bob Morris, to the county planning commission.

Let’s do a little compare and contrast.

Gone are protections for agriculture and timberlands, replaced by incentives to produce on those lands.

• Fennell version: “Promote and facilitate the creation of new housing opportunities to mitigate the decline in availability of affordable housing for all income levels.”

These two may seem similar, but the differences are meaningful. The existing principle is geared toward maintaining an adequate housing inventory. Fennell’s version takes for granted a decline in affordable housing, and calls on the county to actively “promote and facilitate” new opportunities. Since the general plan update is a planning document intended to last for 20 years or more it makes little sense to base policy on a variable market assessment, especially one that may already be incorrect. According to the latest data from the Humboldt Economic Index, home sales have increased by more than 15 percent in the past year while prices have dropped dramatically.

• Existing principle: “Ensure efficient use of water and sewer services and focus development in those areas and discourage low-density residential conversion of resource lands and open space.”

This change comes straight out of HumCPR newsletters. Fennell’s suggestion would eliminate the goal of focusing development around existing services and instead open up the county’s rural lands to development, in part by allowing non-standard waste management systems.

Here Fennell explicitly places landowner rights ahead of environmental protections, which she would leave to “a balanced approach.” She doesn’t specify whose definition of balance would be applied. Opinions in this county vary wildly about how best to balance the two opposing values.

• Existing principle: “Preserve and enhance the character of Humboldt County and the quality of life it offers. “

• Fennell version: “Honor and enhance the diverse character of Humboldt County and the quality of life it offers.”

Replacing “preserve” with “honor” implies reverence. To what? You decide.

Here Fennell shows a libertarian’s distrust of government, denying the county’s authority to develop a strategy for economic development. Such development is a goal unto itself, says Fennell.

• Existing principle: “Adhere to a practical strategy that can be implemented.”

• Fennell version: “Adhere to practical strategies that can be implemented utilizing constructive cooperation and common sense.”

• Existing principle: “Provide a clear statement of land use values and policies to provide clarity in the County’s permit processing system and simplify review of projects that are consistent with the General Plan.”

• Fennell version: “Provide a clear statement of land use values and policies in the County’s permit processing system and simplify review of projects .”

Fennell would eliminate the requirement that projects be consistent with the general plan, which raises the question: Why have a general plan at all?

• Existing principle: “Include actionable plans for infrastructure financing and construction.”

• “Ensure that public policy is reflective of the needs of the citizenry as expressed by the citizens themselves.”

• “Maximize the opportunities to educate the public about the planning process, in order to have meaningful participation in the development and maintenance of the Plan.”

• “Support a broad public participation program at all levels of the decision making process; including study, workshops, hearings, and plan revisions.”

If you'd care to discuss these dramatic revisions to the principles guiding our county constitution, you'd better hope you can take Monday off work. The hearing starts at 1:30 p.m. in the supervisors' chambers at the county courthouse.