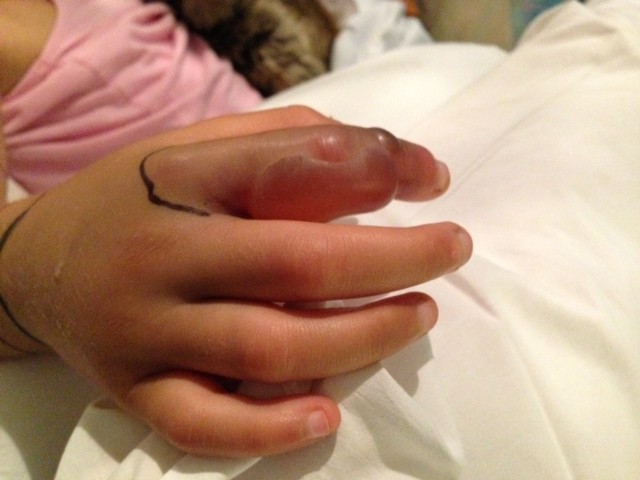 Last Saturday afternoon, up at her uncle's place in Kneeland, 8-year-old Marley Bones (pronounced "Bo-NEZ") was engaged in a favorite pastime -- trying to catch small wriggling wildlife -- when something caught her. It was brief -- a quick, sharp fang-jab on the knuckle of her right pointing finger.

"Marley's just an adventurer," said her mom, Colleen Bones, earlier today by phone. "She was lifting up all these rocks where all the lizards hide, and she was reaching for a blue-belly lizard when a snake she didn't know was there bit her."

It turned out to be a baby rattlesnake. They rushed her St. Joseph's Hospital where she was treated with anti-venom. Then the ordeal really began.

"All of a sudden her body came into a red rash, and she was having a hard time breathing," Colleen Bones said. "It was just so awful and it got so intense so fast. They realized she was allergic to the anti-venom."

Her bit hand started swelling up and her finger turned white. Colleen Bones said Marley was given something to counter the reaction. The hospital decided to fly her to U.C. Davis Children's Hospital.

The swelling from the venom continued to move up Marley's arm, so late that night the U.C. Davis doctors gave her another dose of the same anti-venom. Her body reacted badly again -- white rash, and breathing trouble. "But this time they were ready for it," Colleen Bones said. They gave her something to counter the reaction, and waited. Eventually, both reactions -- to the bite and to the cure for the bite -- subsided.

On Tuesday, Marley got to come home to Humboldt, where she's recovering just fine with a giant blister on her finger and bruising spreading from her arm to her torso. Colleen Bones said the doctors at Davis told her that her daughter's reaction to the anti-venom was rare and severe. (We're waiting on details from U.C. Davis regarding this.)

It's also rare to be bit by a rattlesnake in Humboldt County. Dave Lancaster, a wildlife biologist with the state Fish and Wildlife Department's northern region Eureka field office, said this is the first time in his nine years here that he's heard of someone being bit.

"Rattlesnakes aren't very common in the redwood belt where most of the population is," Lancaster said. "But they can be quite common in parts of eastern and southern Humboldt, where it's drier and warmer in the summer and there's more open habitat. The closest to the coast you'd expect to start seeing them would be up along Kneeland, and down on the Mattole."

Colleen Bones said her daughter has not been scared off of adventuring.

"I can't say I've ever seen rattlesnakes around here," she said. "I don't think Marley has either. She said if she had seen the snake, she would have tried to grab it. She's so used to catching garter snakes. Now she knows better. We've been doing our research, looking at pictures of them. Now she's a snake expert. She says she'll be more aware."

Marley's mom laughed and added, "She also says she's happy that she saved the lizard's life."

The Boneses also learned what not to do if someone's bit by a rattlesnake: "My husband had actually tried to suck out the venom when Marley got bit," she said. "[The doctors told us] you should never do that, because the human mouth is so dirty and you could cause a bad infection. And the venom quickly penetrates the skin and bloodstream, so there's no way you can suck it out, anyway."